For the ordinary soldier serving in North Africa during the war, their cricketing opportunities were usually restricted to makeshift pitches created on stony ground, with rudimentary equipment being used. However for prominent players from England, Australia, New Zealand and South Africa, there existed three sporting clubs in Cairo and Alexandria which afforded a taste of the luxuries of domestic cricket, albeit in heat of up to 120 degrees.

Cairo’s Gezira Sporting Club was the scene of many famous wartime matches. The facilities were laid out on the southern end of Gezira Island and included gardens, polo fields, a golf course, cricket pitches, squash courts, tennis courts and croquet lawns. A new clubhouse had been built in 1938 fronted by a swimming pool. 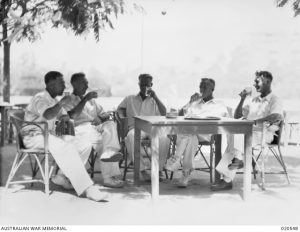 A servicemen’s guide to Cairo stated that that for `All Soldiers, Sailors and Airmen of the British and Imperial Forces’ part of the ground had been `set aside…where you will find the green grass and shady trees a pleasant change, where you can watch regular Cricket matches, and take part yourself’. The club employed the services of a professional, Abdou Hassanein, a right-arm spinner considered by many to have been of English county standard. The main cricket ground was lined with exotic trees and had a large scoreboard and sight screens. An immaculate outfield enclosed the matting wicket. The club was described as `an oasis in Cairo’ with a typical English pavilion complete with decorated afternoon tea tables.

Bob Crisp described the mood at the Gezira Club during one match as `Rommel stood confident and menacing beleaguered Tobruk’. The South African quick took two wickets in one over, including that of Wally Hammond, `the applause rippled round the khaki-crowded ground. The applause was for me, and I enjoyed it, as I always have done, but it could not drown the sound of distant gunfire.’

Such was the standard of play in many of the matches that they took on quasi- test status in the minds of players and spectators. One Australian Imperial Forces XI could boast three test players – Lindsay Hassett, Ray Robinson and Alec Hurwood – and five Sheffield Shield players. The team had been provided with fresh flannels for each of their tour matches and proudly wore an official tour blazer.

Tasmania’s Advocate newspaper proudly reported on the AIF side’s unbeaten tour which ended in a resounding victory by an innings and 81 runs in a match billed as a `test’ between them and `a crack eleven from the Gezira Sporting Club’, which included England test players Freddie Brown and Bill Bowes. A `large and exuberant contingent’ of Australian troops enjoyed the entertainment. Their `barracking and cries of advice often brought roars of laughter from the rest of the spectators’.

A different atmosphere was created after an encounter between the NZEF Base XI and the Gezira Sporting Club in September 1941 as Maori troops entertained the crowd with a song of welcome at the conclusion of proceedings.

Players stationed at the NZEF base camp at Maadi, about seven miles south of Cairo, enjoyed use of the Maadi Sporting Club ground for big matches. In 1942 a series of three matches took place between the Kiwis and the South African Base Depot. It had been ten years since the countries had met at Test level. The Springboks were victorious in this first wartime series.

South Africa’s Dudley Nourse recalled the joy that wartime cricket could provide `It was difficult to know exactly who was in the war theatre until a game of that nature was arranged, when old friends would be unexpectedly met. Once the fellows, drawn from different units, were assembled, there were exclamations of delight as old pals saw each other again after long absences from contact.’

Neil Begg, a New Zealand fast-medium bowler also looked back fondly on these encounters at Egyptian country club grounds, `the wickets at the Gezira and Maadi grounds were good and I remember with pleasure the dignified waiters bringing us cool drinks on silver trays at relatively frequent intervals. At the time I thought it was a fine way of waging total war’.

By 1943, in recognition of the contribution that the playing and watching of sport could make to military morale, the Egyptian government built the Alamein Club `presented by the people of Egypt to the Seaman, Soldiers and Airmen’ of the Allied forces. Named after the decisive battle of the Desert Campaign, the cricket ground had a fine pavilion, with a bell from El Alamein railway station installed at the front which was rung to signal the start of play.

Although the grounds may have resembled those of a picturesque country club, the wickets did not. Strips of coconut matting would be laid over a hard surface, affording the bowler a greater degree of spin and lift than traditional grass strips. In 1940 Jim Laker was a useful Bradford League batsman and bowler of off-cutters. However, having discovered the ability to produce prodigious spin and bounce on matting wickets he experienced significant success. 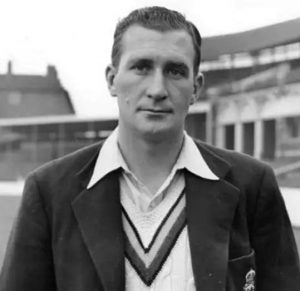 The 1944 season saw him claim 221 wickets at an average of 5.9, also amassing 960 runs. Essex’s Peter Smith, the main organiser of cricket in Alexandria, noted that `Laker, with his immaculate length off-breaks, used to play for Saltaire as a batsman. He should now walk into most county sides as a bowler.’ Smith was to prove a fine judge of his fellow spinner.

Gerald Pawle, writing in The Cricketer Spring Annual of 1944, summed up the importance of the matches at the Egyptian sporting clubs to players and servicemen alike:

I hope the organisers of the many games in Cairo and Alexandria realised how much it meant to men who had spent weary months living and fighting in the wastes of the Western Desert – and to men of the Royal Navy who had probably not seen cricket for years, to be able to forget the war for a few brief hours in playing or watching the game, which, more than any other brings memories of home – and England at peace.

6 inches short of a length