The Grim Test: Cricket During the Second World War

As the domestic game faces the very real prospect of the `season that never was’ of 2020, the previous occasion during which test and first-class competition disappeared from the fields of Britain remains within living memory. Between 1940 and 1945 the civilised world fought for its very survival. Sir Home Gordon, writing in The Cricketer in September 1939 stated that `England has now started the grim Test Match with Germany’, the objective of which was to `win the Ashes of civilisation’.

Despite this rude interruption of familiar cricketing routines, the era of the Second World War is far from the lacuna of action that threatens to scar 2020 and beyond. Spectators around the country could enjoy displays of cricketing prowess from eminent British cricketers and, as the war progressed, players from around the British Commonwealth serving in the armed forces. Whilst most county clubs struggled to fulfil more than a couple of fixtures per season, much high quality one and two-day cricket was played by teams representing the Army, the RAF and their counterparts in the Australian, South African and New Zealand forces. Usually these matches raised money for war charities via gate receipts and collections.

In addition, two teams were established to draw together some of the best available talent to play matches against club and services teams. The British Empire XI was the brainchild of 19-year-old Desmond Donnelly. Frequently containing leading players such as Denis Compton and often led by Essex all-rounder Ray Smith, the XI enjoyed the skills of West Indian leg-spinning all-rounder C.B. Clarke, who took 665 wickets at 9.82 across the five war seasons. The British XI played 243 matches between 1940 and 1945 raising thousands of pounds for the Red Cross. The London Counties XI, founded by Charles Holmes with Jack Hobbs serving as president, brought together many southern professionals to play matches in the Home Counties.

Elsewhere, competitive league cricket continued in the north and midlands, with many test and county players being employed as weekend professionals by the clubs. Further afield, some first-class cricket was played in the Antipodes and the Indian subcontinent.

For men serving in Africa and the Far East, opportunities were provided to play at all standards. The Gezira club in Cairo hosted matches which pitted English service teams against their Commonwealth counterparts. Luminaries such as Wally Hammond and Lindsay Hassett were cheered on by their uniformed countrymen. 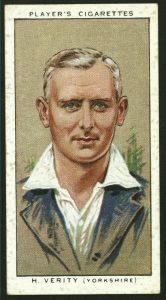 Inevitably there was a sombre side to cricket’s wartime account. From renowned test stars such as Hedley Verity to the keen but modest club player, many cricketers paid the ultimate price for Allied victory. The Victory Tests of 1945 were played against a backdrop of relief and sorrow. Nevertheless, cricket would emerge intact into the post-war world in broadly the same format as 1939.

Over the following months this blog will chart some of the major innovations and adaptations that wartime cricket brought about and feature some of the players who shone rays of sunlight across the gloomy spectre of total warfare.