Somerset’s pre-war playing fortunes had been somewhat of a yo-yo affair, finishing consecutively 14th, 7, 13th, 7th and 14th in the county championship between 1935 and 1939. Their cricket was characterised by the six-hitting batting exploits of Harold Gimblett and Arthur Wellard. However war hit the county hard, with 1940 seeing a complete blank in fixtures. Whilst most of the county’s players were quick to join the armed or civilian defence services, two men who would entertain Somerset’s post war followers took an unusual and principled stand on the war.

Yorkshiremen Johnny Lawrence and Miles Coope decided to invoke the conscience clause of the Military Service Act, objecting to work directly relating to the war effort. Lawrence, a committed Methodist who would later resign his membership of Yorkshire CCC over the involvement of leading players of a so-called ‘Rebel’ tour of South Africa, and Coope, a member of the Baptist Church, appeared before the Yorkshire tribunal in Leeds in 1940.

Coope had proclaimed: ‘The military put their faith in guns but not in God.’ Employed as a piano tuner at the time, in addition to playing in the Bradford League at the weekend, Coope was challenged by Judge Stewart that several Baptist chaplains were currently in France ministering to the spiritual needs of the British Expeditionary Force. Coope replied that Christians were taught to be prepared to suffer, leading Stewart to conclude he had ‘the attitude of a person who would like to be a martyr burned at the stake’.

Both Coope and Lawrence were ordered to undertake forestry work. Although many conscientious objectors found themselves driven out of their jobs, and shunned by friends and family, it would appear that the positions of Lawrence and Coope were accepted by their fellow cricketers as they both carried on playing league cricket before moving to the South West to play for Somerset CCC after the war. Lawrence was to play 283 matches as a leg break and googly bowling all-rounder, whilst Coope would top 1,000 runs for Somerset in 1948 but without making a century. 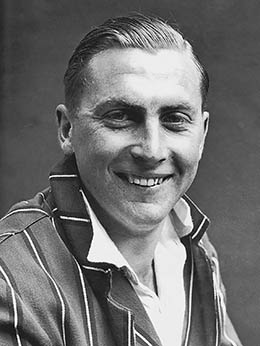 Harold Gimblett, Somerset’s forceful opening batsman, had a lucky escape during an air raid on Bristol. A member of the Auxiliary Fire Service, Gimblett was in charge of a trailer pump squad when two of his men were killed and another wounded. Gimblett himself was fortunately physically unhurt. Nevertheless, a perpetually troubled soul, Gimblett carried the mental scars of his experience long after war had ended. In 1947, he confided in umpire Frank Lee, ‘every time a bomb fell there was a lovely, pink glow and it blew up a piece of someone.’ Who can tell what effect his war experience had on Gimblett’s decision to die by his own hand in 1978.

Wartime exigencies often meant that sides brought together under a county name contained many guest players. A county match occurred at the Clifton College Ground near Bristol in July 1941 between teams representing Gloucestershire and Somerset. The sides comprised servicemen stationed in the two counties. Somerset stalwarts Harold Gimblett and R.J.O. Meyer were boosted by the presence of Essex’s Tom Pearce and Frank Vigar, and Kent’s Tom Spencer, who thirty-five years later would umpire the first-ever World Cup Final at Lord’s.

Bill Andrews, the Somerset all-rounder, joined Huddersfield and District League Club Slaithwaite for the 1942 season. The following season the mercurial Andrews took a contract with Bradford League’s Bingley, taking nine for 79 in a Priestley Cup tie against Eddie Paynter’s Bingley. Andrews also played in the Ribblesdale League appearing for a combined league team against Blackpool Services. 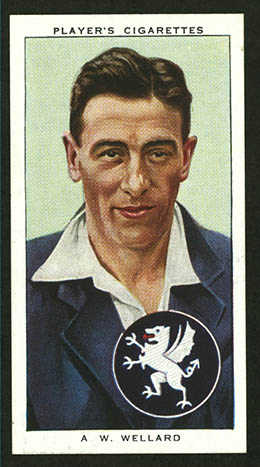 Andrews’ county colleagues, Arthur Wellard, did not have such fulsome playing opportunities. The lusty-hitting all-rounder had used part of the £1,418 raised in his 1939 benefit match to buy a tobacco and confectionary business, a distinct gamble in wartime. Mrs Wellard was running the flourishing business while her husband was serving with the RAOC in Algiers. However, he was regretting that his unit was taking part in every sport except cricket.

‘Greater love hath no man than this, that a man lay down his life for his friends’ is the most frequently-used Bible verse used in twentieth-century war commemoration. Never was it more apposite than in the case of Foster ‘Peter’ McRae. McRae had made twenty-five appearances for Somerset from 1936 to 1939 as a right-handed batsman, with a highest score of 107 coming against Hampshire at Taunton. Joining the RNVR as a surgeon lieutenant, McRae was on board HMS Mahratta escorting an Arctic convoy off northern Norway in February 1944 when it was torpedoed by a German U-boat. Another erstwhile Somerset man, R.C. Robertson-Glasgow, described in The Observer McRae’s final moments: ‘Seventeen survivors scrambled on to a crowded Carley float, with their doctor, McRae. Suddenly the doctor said: “I appear to be in the way here” and as if he were interrupting some private matter, slipped into the water.’ McRae perished in the freezing Barents Sea, never to be seen again. 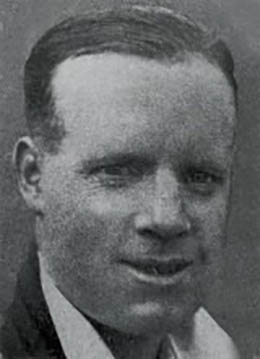 Private Jack Lee, the former Middlesex and Somerset all-rounder and a regular for the London Counties XI, was killed on 20 June in Normandy while serving with the 208 Company of the Pioneer Corps. When the club was wound up in 1946, the remaining funds were given to his widow, Agnes. She was in sore need of the solidarity of her husband’s professional colleagues as shortly after his death the tobacconist and newsagent’s business she ran was completely destroyed by a flying bomb.

Somerset emerged from the war in seemingly good shape, finishing 4th in 1946, their highest position in several decades. Their happy-go-lucky approach to the game was in keeping with the post-war spirit as first-class cricket returned to the popular west country club.