Having decided not to do the Test matches in Sri Lanka (thought it would rain) I arranged to do the whole of the West Indies tour with a friend Sharon (friend of a friend) and am now back in my favourite island Barbados exactly halfway through my trip. 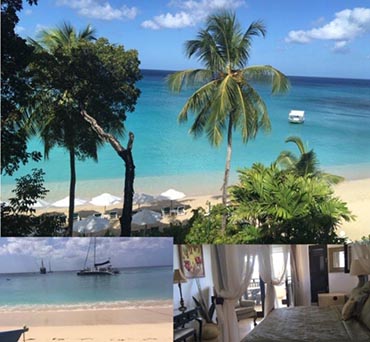 It’s 10 years since I was in the Caribbean and it really has the best climate for Jan/Feb/March. Some refreshing short showers and a lovely breeze but haven’t worn a ‘cardi’ since I arrived. .. it’s not the cheapest place but not as bad as I expected especially if you use happy hours and have a few nights in.

You may have noticed I haven’t mentioned cricket …..it all started to go wrong when ‘people’ (not sure who exactly makes the decision) over analysed the wicket and decided that two spinners would be good in the West Indies and to drop one of our best opening bowlers (Broad) and open with Curren who doesn’t open the bowing for Surrey…. I’ve never played cricket but have realised so much talk (crap) is made of the state of the wicket before a game and very rarely does it play as described…. According to Paul Farbrace WI where Steady Eddies on the first day. Red face the next when we were out for 77 (not the worse score I’ve see in the Caribbean as was there for the 51 all out in Jamaica).

Can’t help thinking a change of coaching staff is needed. Players need someone to give some mental strength and a kick up the …. I feel really sorry for people who have spent a lot of money for a once in a lifetime trip to Barbados. Our trip was made better with lots of great dinners, horse racing and a hysterical ride back (slower then walking) to the reggae bus terminal in a tricycle and of course lots of reggae bus rides!

Antigua (except for the beaches) has never been my favourite island…too many A/I hotels means lack of good bars etc although we did visit Hemingway’s in St John’s twice. The saving graces were the view from our villa in Jolly Harbour and surprisingly the ground. 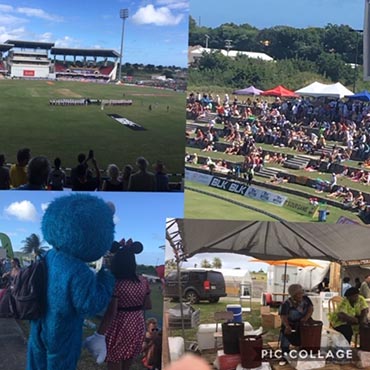 I was there for the 10 ball Test so had no good memories and really liked the old ‘rec’ ground so was pleased to find a good viewing ground with access all the way round. Great local food stalls selling everything from amazing coffee/banana bread/ice cream made by two large ladies and lobsters. Pity we where there only 3 days ….. cricket what cricket … we were worse than in Barbados. When you see the 9/10/11 batsmen come down the steps ready to go in as the previous batsman goes to the crease you know what to expect! So plenty of time to go to the beach and visit English harbour. The owner of our Airbnb gave us a driver ‘Bumpy’ for the whole of our stay. Great character and he plays percussion and vocals in the ‘Spirited Band’ with Richie Richardson and Curley Ambrose! 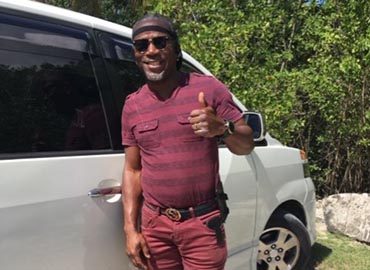 I have been to St Lucia 4 times now, 3 tennis holidays and once with the kids in the late 90s but have never done cricket. We had a lovely large villa 5 mins away from Rodney bay and 10 mins from the ground. The ground isn’t the best and inside they built a ‘Berlin Wall’ so people couldn’t walk around despite not being half full. I did meet up with my tennis partner Chris from 20 years ago!

Back to the Cricket …so the prediction was WI had won the series, Holder banned and players injured so they will come out hitting and not be bothered re result…right! At least we showed we can bat and think Root might have played himself in for the ODIs. Pleased for Chase (he got all his 8 wickets in the series in one innings) getting a hundred and it was Sharon’s first win abroad! (9 Tests)… 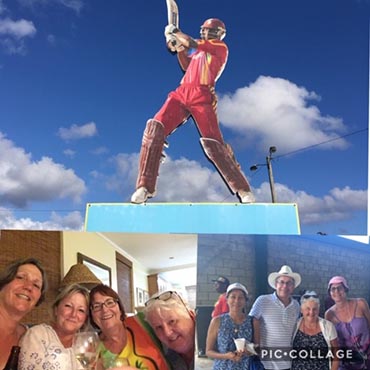 Hopefully winning a Test series might spur the West Indies on to better things and spark some interest for the future. The best phrase heard in our one night in A/I at Jolly Beach … waitress to customer (Canadian) are you here for the cricket? Response ‘not sure what that is’…. After our performance I’m not sure either but if we knew what was going to happen on tour there would be no point coming! Hoping for better next week ……

A Positive test, followed by a Negative Test!

The Oval Test versus India

The North-South divide in action!

And the Winner is…..the Weather!

The Cooky and Rishi Show – Part One

A Positive test, followed by a Negative...

The Oval Test versus India

The North-South divide in action!