Home Blogs The impact of an English captain
Blogs

The impact of an English captain

As long as I’ve watched Test cricket (1993), and long before, the role of the England Test captain has always been one for debate.

Many sight the impact Mike Brearley had as an example of an out and out captain. Given his post cricket career (He is now a psychoanalyst, psychotherapist) there is certainly an argument for having such qualifications to captain a cricket side. Let’s face it all teams at all levels have a mixture of insecurity and insanity disguised in various characters across the XI.

Then there is what I’ve become used to hearing is ‘the Australian way’ – pick your best XI and someone can captain it. This theory was often put forward in the 1990’s but Shane Warne was quick to say that during Steve Waugh’s tenure that anyone could have captained that side due to the strength of the payers. I suspect that is true, but Border and Taylor laid the foundation prior to that time. Also, one could sight Steve Smith as the prime example of why this does not work, he and Warner were the best two batsmen in that XI but they steered this game into disrepute (although I question the role of the coach too).

One of the reasons it is so topical right now is Joe Root has fallen out of the top Test batsmen since he became captain, whilst his peers (Kohli and Williamson have maintained or improved their batting records).

So is this a problem more prevalent in English cricket? My instinct was yes. Our media and press are demanding and not always supportive, we do play more Test cricket than any other country, and I have no idea how or why so much is expected of the captain when we have so many ‘men in suits’. In spite of Ashely Giles, Ed Smith, James Taylor, Mo Bobat, Chris Silverwood et al – it is still the captain who faces the media, selects the side and so on.

I decided to look at all of the recent captains who have captained for more than 40 matches: 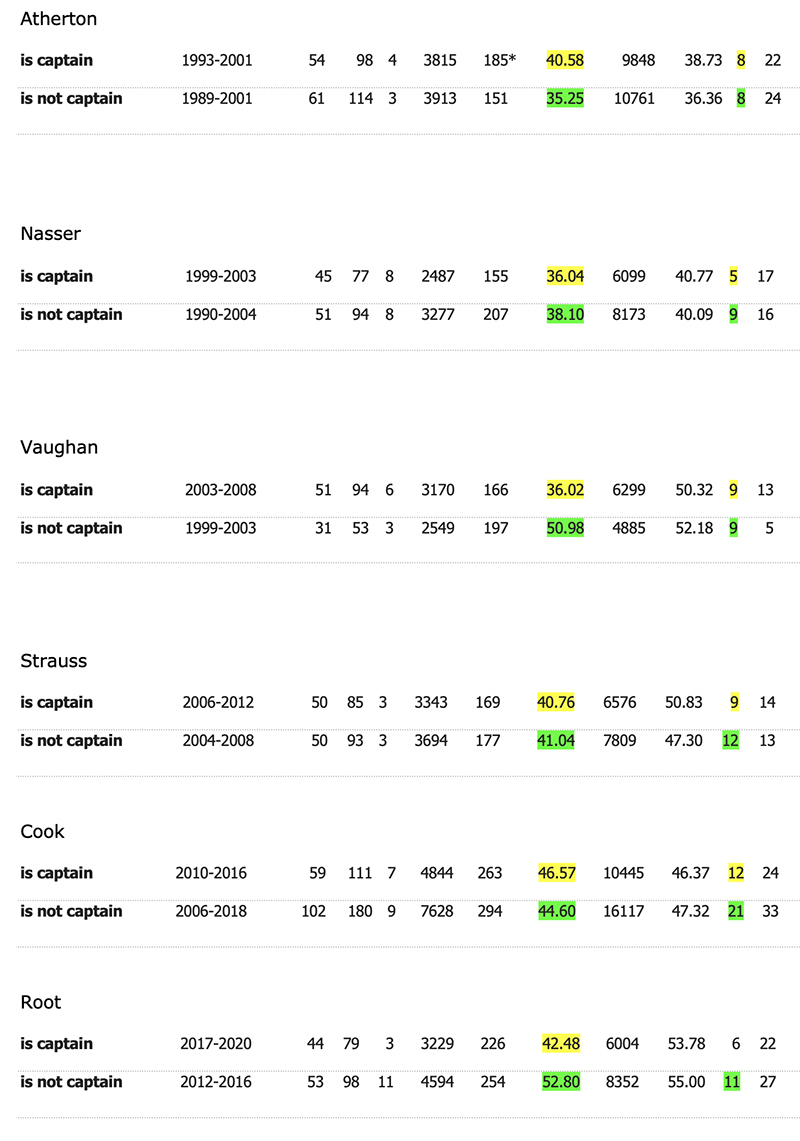 Interestingly Atherton is the exception, he averages 5 runs per inning more as captain and has the same number of 100s.

Root was on course to be a great England batsman, possibly the first one to average 50 plus in Test cricket for generations. That looks less likely now, but is that irrelevant if he leads the side to wins in India and Australia in coming years?

I think the answer is yes, his Test match legacy will be defined by those away results irrespective of his eventual batting record.

I’m sure his job could be made easier if the coach was given more responsibility (think rugby union) where they pick the squad and the starting XI and do more of the press and other external work – removing the pressure and layers of bureaucracy would allow the captain more time to concentrate on his game – 10 runs per innings more over a 5 Test match series in an extra 100 runs!

The Art & Science of Selection

Where Does England Cricket Go Now?

County cricket is back!

If not them, who?

Assessing where England are in Test Cricket

England’s Batsmen in a Spin

The Art & Science of Selection