Yorkshire Country Cricket Club successfully bookended the Second World War, with championship victories in 1939 and 1946. On the surface it would seem that the county had simply picked up where they had left off when Hitler so rudely interrupted proceedings, having been triumphant in seven of the ten pre-war seasons.

However, the 1946 victory masked a dislocation which would need see them not win the championship outright again until 1959. Yorkshire had been one of the few counties to turn in a profit in 1939, as the county game struggled financially, despite the success of test cricket. Yorkshire CCC quickly accepted, as did every other county, that no competition would be possible during the war. 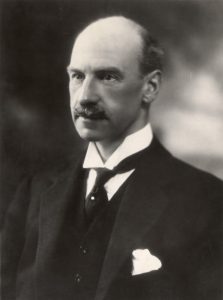 Sir Stanley Jackson, presiding over the Yorkshire AGM in January 1940 struck a defiant note. Cricket would be played in the summer `behind the lines in France, on village greens and some club grounds at home…We shall have need of cricket, all the same, to exercise the muscles and rest the minds of soldiers and workers with its health-giving comradeship.’ Jackson thought that grassroots cricket would form the backbone of the game, as planning for first-class matches would strike the wrong tone.

Brian Sellers, Hedley Verity, Herbert Sutcliffe, Norman Yardley and Bill Bowes were given Army commissions whilst Maurice Leyland and Frank Smailes were appointed sergeants in the Army Physical Training Corps. Paul Gibb, Cyril Turner and Emmott Robinson joined the RAF. Several of these players played in a trio of matches between Captain Sutcliffe’s XI vs Sergeant Leyland’s XI at Sheffield, Leeds and Bradford.

Even during the nation’s darkest hour, the future health of the game was being nurtured. In July young cricketers were invited to attend the Headingley ground for coaching by George Hirst. Hirst also attended a Leeds young players’ match at the ground. The near-septuagenarian was also commissioned to tour the ridings to coach boys from elementary schools through June and July. From Hull to Redcar, from Barnsley to Bradford, the sagacious coach cast his experience eye. 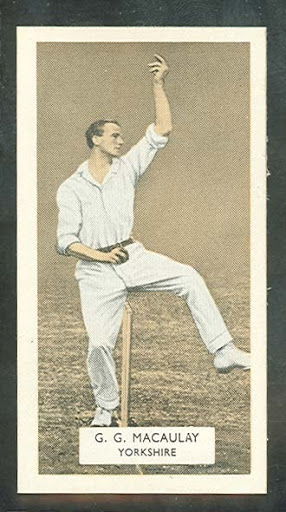 The second of five England test players to be killed whilst on service was a Yorkshireman. George Macaulay perished in mid-December while serving in the RAF on the Shetland Islands Although contemporaneously ascribed to pneumonia, it was in fact cardiac failure linked to alcoholism that had done for the volatile Yorkshireman.

Captain A.B. Hamer RAMC is not a widely-acclaimed personality in cricketing history, but his skill helped shape the first post-war decade of England’s fortunes. Sergeant Len Hutton came under Hamer’s care in March, having slipped and fallen on his left arm whilst conducting a training class, fracturing the radius and dislocating the base of the ulna at the wrist. Hutton, an Army P.T. instructor, had his arm encased in plaster, Hamer then wrote a note to the specialist unit in Wakefield that would attempt to return full use of the arm, `In view of the great importance of this man’s left arm in batting, we trust that you will attend to his further treatment and admit, as arranged by telephone.’

Coming under the care of distinguished surgeon Reginald Broomhead at Wakefield, who had to perform three operations on the crucial arm, Hutton was eventually discharged from the army in 1942. With a left arm almost two inches shorter than the right, he was considered fit merely for civilian work for the Royal Engineers. However sufficient skilled work had been done that Hutton was able to resume batting for Pudsey St Lawrence, in 1943 and regain his status as the pre-eminent test opening batsman in the post-war period.

August 1941 marked the death of legendary Yorkshire left-arm spinner Bobby Peel, aged 84, who had been sacked by Lord Hawke back in 1897 for presenting himself intoxicated on the field at Bramall Lane. Peel had been a guest at a match at Headingley between Herbert Sutcliffe’s XI and Maurice Leyland’s XI on 29 June 1940. Len Hutton made 56 for Sutcliffe’s XI as a crowd of 6,000 raised over £300 for the Lord Mayor of Leeds’ Red Cross Fund. 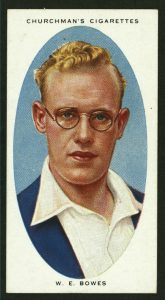 On 20 June 1942, the bespectacled Bill Bowes, whose demeanour was often that of a kind university professor than a hostile fast bowler, was one of 20,000 prisoners taken at the Fall of Tobruk. Bowes reckoned the art of survival as a prisoner of war was the ability to live on one’s wits and a not-too-full stomach, no mean feat for a man of his muscular 6ft 4in frame. Ingenuity and comradeship amongst men from diverse backgrounds formed the basis of survival and the flourishing of the human spirit.

Alongside Bowes in PG21 at Chieti was future Yorkshire batsman Harold Beaumont from Thongsbridge. Bowes was appointed Sports Officer for the prisoners at Chieti, facing problems such as an initial lack of equipment and suitable space for most ball games. When it was possible to arrange organised sport, the periods of play had to be kept very short, since their diet denied the men any real energy.

The death which most deeply affected the cricket world was that of Hedley Verity. Before the invasion of Sicily, Lieutenant Colonel Shaw had arranged one final cricket match for his 1st Green Howards battalion in the sealed area at El Shatt camp. The opponents included General Sir Miles Dempsey, commander of XIII Corps. A railway sleeper was found and attached to a chain at the rear of a truck and dragged round a flat area of salt and sand to create a cricket pitch. Some matting was placed over concrete and a wicket established. Verity took 6 for 37 `bowling imperturbably and as near perfectly as made no difference’.

It was to be the great man’s final performance. On 20 July 1943 the Green Howards launched their attack on the blazing plain of Catania. Captain Verity was hit in the chest. Lying in a cornfield, he urged his men forwards, but they were forced to retreat. They last saw their leader with his head being cradled by his batman, Thomas Reynoldson. Verity died eleven days later at Caserta Military Hospital, despite the care of Italian medical orderlies and captured RAMC men. Verity’s family, his comrades and the post-war cricketing world would be denied his gracious and noble presence. His grave was visited shortly afterwards by a succession of admirers and friends, including Captain Leonard Hobbs, son of Jack, Frank Smailes and Eric and Alec Bedser.

Once the war in Europe ended, Yorkshire looked to rebuild an ageing and war-ravaged team. A Yorkshire Colts match at Huddersfield on 9 August 1945 featured promising players. One was `Wardle, a 22-year-old miner from Denaby Main, [who] is being spoken of as a possible successor to Verity. The obvious gaping and aching hole left by the great man’s death was initially filled by 43-year-old Arthur Booth. Booth, who had plied his trade in the minor counties after being unable to dislodge the great man from the side, was written off as being too old to succeed to the coveted left-arm spinning berth. He did his cause no harm in the Roses match at Old Trafford on 2-3 July, taking 10 for 66 in the match. Bill Bowes was also back in action having last worn the white rose on that solemn occasion at Hove in 1939. 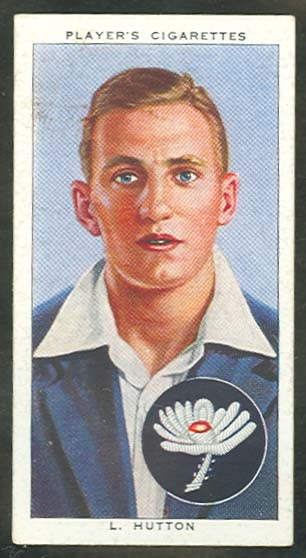 The return fixture, a three-day match at Bradford Park Avenue on 13-15 August was set aside as a memorial tribute to Hedley Verity, and a subscription list for his widow Kathleen was opened. Sir Stanley Jackson appealed for generous support, saying Verity would have had a benefit match in 1941 had war not intervened, `an opportunity of showing respect and gratitude to the memory of one who always played the game and did his duty to the end.’ The total receipts were £3,000. On the opening day Bowes bowled finely but had to retire soon after the luncheon interval with a pulled muscle, taking no further part in the match. He had, however, claimed his 1,500th first-class wicket, a feat that must have seemed a forlorn hope during his captive years. The country’s premier county side was also granted a match against the Australian Services at Sheffield on 23-24 July. Keith Miller and Len Hutton scored centuries in a drawn match. 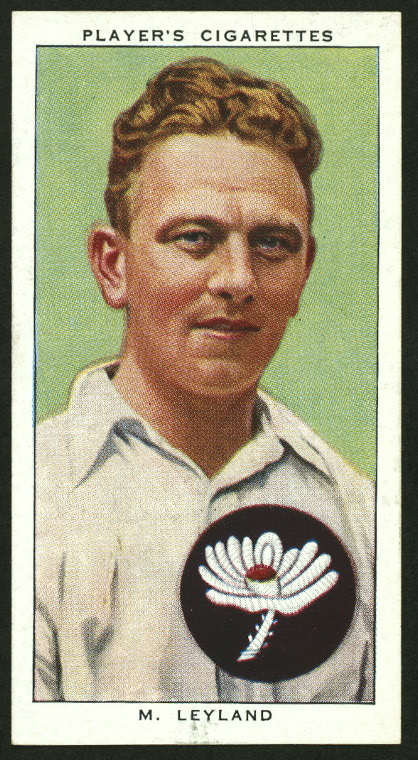 Further promising prospects for Yorkshire included Alec Coxon and J.P. Whitehead, who had emerged as effective opening bowlers during the war. Coxon of Saltaire was 28-years-old by 1945, blessed with tireless energy and was able move the new ball either way and, when the shine wore off, he cut it either way. Whitehead, a 19-year-old engineering cadet from Preston, impressed for Yorkshire against Australian Services. He had previously appeared for Lancashire, but Yorkshire discovered he was born at Upper Mill, a few yards inside the border. One observed noted `After a shuffling, hesitant run of about nine steps, he sends down quite a fast ball. At the moment of delivery, the action is perfect, with the right shoulder finishing well down the wicket.’ This admixture of those keen to make their initial mark on the county, such as Booth, Coxon and Whitehead, and the old guard intent on one last hurrah – Bowes, Sellers and Leyland, was enough to see Yorkshire retain their county championship title in 1946 with just one defeat. Like every other first-class county, Yorkshire had emerged from the war intact. Those left to play could reflect on their deliverance from the conflict, but rue the loss of six seasons from their first-class careers.

What does bilateral even mean? The Texaco Trophy – an appreciation