Sussex CCC had experienced a mercurial run-up to the war, their county championship finishing positions from 1935 being 7th, 14th, 5th, 8th, and 10th. Like many counties, Sussex was in a parlous financial state, having reported a loss of £1,863 from the 1939 season. One of the principal reasons for this was the cancellation of the match against the touring West Indians, who left England early due to the worsening international situation.

The county’s 1939 beneficiary, Jim Parks, might have expected to raise £50 from a collection at the match. The Sussex servant, who in 1937 had become the only player to achieve a double of 3,000 runs and 100 wickets, was saved from a catastrophic collapse of his benefit prospects by the decision of Yorkshire to complete their programme for the season. This was not a lightly taken resolution, as the prospect of war weighed heavily on many white rose shoulders. Sussex hosted Yorkshire in the traditional denouement of the championship.

Hedley Verity dismissed the hosts for 33, the peerless master achieving figures of seven for 9. Yorkshire quickly knocked off the 30 runs required for victory, as the crowd sang patriotic songs from the stands. A thoughtful Parks reflected on the sportsmanship of the Yorkshiremen in having played his benefit match despite the circumstances. He walked home with his young son Jim junior, the future Sussex and England wicketkeeper, £800 to the better. 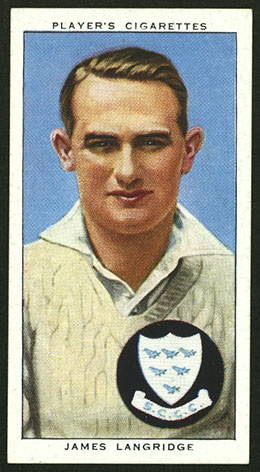 Due to the county being on the south coast and therefore a potential invasion zone, little cricket was played in 1940. However, by 1941 Sussex played some early season games under the name of ‘A.E.R. Gilligan’s XI’. In September, the Sussex County Ground at Hove hosted a match in aid of the Spitfire Fund, with a Sussex XI including Arthur Gilligan, Maurice Tate and the Langridge brothers taking on a scratch team from the Brighton, Hove and District Cricket Association. 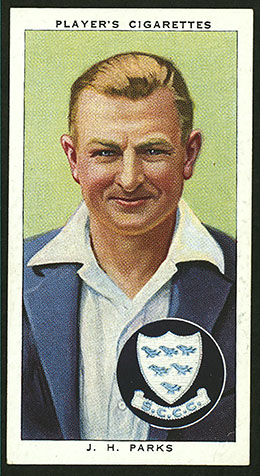 Despite a combined age of over 90, Maurice Tate (three for 24) and Arthur Gilligan (four for 38) reduced the RAF to 133 at Hove on 31 May. It was not enough to stop the flyers winning on the first innings. John Langridge and Jim Parks were available to open the batting for the county against an RAF XI on 2 August. Despite an opening partnership of over 100 runs, the county, hampered by having to play with ten men, still slumped to a narrow 8-run defeat against an RAF XI led by their former captain, Arthur Gilligan.

In the 1942 season, Hove staged a match every Sunday afternoon, to provide relaxation for the services, with no charge for admission. The majority of matches featured an RAF XI under the management of Pilot Officer H.P. Chaplin, captain of Sussex before the previous war. W.N. Riley, a former Leicestershire amateur, serving as Brighton’s ARP Controller, arranged a ‘Seven Services’ tournament of twenty-two matches on Wednesdays and Saturdays between Navy, Army, RAF, Home Guard, Police, National Fire Service and Civil Defence. Matches were played on the time-limit system, and seldom did any team bat up to the full limit. Pleasant and keen as the cricket was, most of the scoring and wicket-taking was done by first-class players of tried ability, and, so far as Sussex were concerned, no new stars, let alone comets, whizzed across the sky. Bottom place was taken by the Army team, led by the tireless Captain Maurice Tate. Wisden’s Notes of the Season commented: ‘The years cannot take away his length, but they have confiscated something of that wonderful “nip”.’

The county also organised a Sussex League, giving a rare opportunity outside of the North and Midlands for truly competitive cricket. In the final match of the season at Hove, Southern Command played Western Command, with Eric Bedser taking four wickets in five balls, including the hat-trick and scoring 52 not out

One Saturday afternoon there was a tip-and-run raid on Brighton and a bomb fell in the south-east corner of the County Ground. The Secretary called out, ‘Lie down!’ as the plane zoomed towards the pavilion. Fortunately, the bomb failed to explode, and the ground was quickly cleared. Arthur Gilligan, who was playing in the match, records that Maurice Tate, his hand in his mouth in that characteristic gesture of his, said, ‘What a nerve! Fancy them doing that to US!’

Sussex was one of several counties which managed to raise teams for the Holidays at Home week. The county managed an impressive thirteen matches, mainly at Hove but also Horsham and Chichester. The county ground was also extensively used as a multiple sports venue. On one June day there could be seen lawn tennis being played in the enclosure and a military football game elsewhere. Canadians were playing baseball on the outfield and the RAF were having a trial cricket match. Four Canadians placed themselves 20 yards behind the bowler ‘to watch his pitching’.

With an eye to the future of the game, a Sussex Cricket Association was formed, which operated independently of the county club. The vision of the association was to act as a feeder of younger talent from the clubs through to the county team. A note of discord was struck as the association proposed to promote league cricket amongst clubs that wished to take part, bringing it into conflict with clubs that were already members of the Club Cricket Conference

One brilliant adornment to the second half of the 1943 season was the presence of players of the Royal Australian Air Force, the most dazzling of whom was Keith Miller. In a match for the United Services against Sussex, Miller announced his arrival in high standard cricket in no uncertain terms, hitting 134 not out in 120 minutes, including twelve fours and three sixes. Home Gordon recorded: ‘The new star from the Antipodes puts tremendous power behind his bat. At one period in consecutive balls he lifted a ball into the tennis courts, drove the next hard past the screen and the third onto the roof of the pavilion.’ The dashing young Australian then ripped through the Sussex batting with seven for 36, securing a victory by 225 runs.

The quirks of wartime availability and selection meant that he then played a match for the county whom he had recently tormented, against the RAF, scoring 11 opening the batting and taking three for 41. The vigorous 23-year-old Australian made a marked contrast to his opening partner, the former Middlesex batsman Norman Moffat, who was approaching his sixtieth birthday. Herbert Chaplin, who had captained Sussex in the five pre-First World War seasons, turned out for the RAF against his old county having recently entered his seventh decade.

Northamptonshire played an away match against Sussex at Horsham – the first inter-county match south of the Thames during the war. Every prospect pleased in the charming surroundings of Priory Park, Chichester, when the match between Sussex and C.S. Dempster’s XI drew a large crowd. Local enthusiasts emphasised that had it not been for the ban prohibiting entrance from Hampshire, only a few miles distant, the attendance would have doubled. Those present generously threw twenty pounds into the charity collection sheet which Dempster and Mercer carried round to receive contributions for Sussex, while the charities of the RAF and RNZAF also substantially benefited.

Cricket in Sussex had been hit hard by the war. Three three quarters of its recognised clubs were temporarily closed down due to evacuation, the ploughing up of grounds, absence of players in the services and, according to W. Walker writing in The Cricketer, the ‘unwelcome attention of the Hun’.

Under the auspices of the Sussex Cricket Association, matches became keener and provided a graduated ladder through which a player might pass to district level, East v West Sussex and Association v County XI. There was also provision of youth matches to prevent players unable to break into a 1st XI from drifting away from the game. For 1945, the SCA had managed to put together a cricket week at Lewes, during which they played St Bart’s Hospital, Alexandra Park, the Australians, the Buccaneers, and Gravesend. Whilst it was hoped that these moves would eventually lead to Sussex winning the County Championship, of far greater importance was the ‘restoration of the game itself to its former grandeur, and the planting in the minds of young players of the ethics and traditions of “cricket” which will prove no small aid to England in regaining her dignity, greatness and peace’.

In May, forty-two boys were invited from local clubs and schools for a weekend of tuition at Littlehampton, receiving coaching from the Langridge brothers, which included batting technique taught via group exercises. In a further boost for Sussex cricket it was decided that the Hastings Central Ground would not be lost and the club could look forward to a new era under the captaincy of Billy Griffith.

Despite this forward planning, the club finished a disappointing 17th in the first post-war championship. It would not be until 2003 that the county would finally break its duck and take the title. However, the spirit shown by cricketers and administrators in Sussex during the war had ensured the game had survived, and brighter times ahead could be envisaged.