From the high point of winning the county championship in 1929, the years leading up to the war had seen Nottinghamshire struggle to compete with other counties. Consecutive finishing positions of 5th,5th, 10th,12th and 12th in the five pre-war seasons coincided with the eclipse of Harold Larwood as a fast-bowling force. The county was fortunate, however, in having eccentric millionaire Sir Julien Cahn as a benefactor, as £20,000 per year was donated from his furniture business.

Although the county championship was suspended for the duration of the war, Nottinghamshire sought to maintain operations on a friendly basis. By March 1940 a Whitsun and August double header against Derbyshire had been arranged. In fact It was Nottinghamshire CCC which was able to maintain the most semblance of pre-war normality, as many of their players were called up into local territorial units or taken on as physical training instructors at nearby recruitment centres. Six matches were played; three against the RAF, one each against Leicestershire and Derbyshire, and one against a Notts and Derby Border League Select XI. It was during one of the RAF matches that the season’s highest individual score was made, with Joe Hardstaff amassing 183 for the flyers’ team against his erstwhile county teammates. The same match saw the emergence of the young Reg Simpson, who scored 134 not out for the county.

County men were doing their bit. Walter Keeton was in the Police War Reserve in Mansfield, Hardstaff, C.B. Harris and Harold Butler were all sergeants in an Anti-Aircraft unit stationed within reasonable distance of Trent Bridge. Bill Voce and George Gunn were in reserved occupations, whilst rising star Simpson, having refused an offer to join the groundstaff at Trent Bridge before the war, worked in administrative support for Nottingham City Police CID. The county’s net annual profit was £43.

‘Bright Cricket Helps Bomber Fund’ was the headline in the Nottingham Journal when Sir Julien Cahn hosted a match at his ground in West Bridgford in early August 1940. Over £70 was raised for the City of Nottingham Bomber Fund as Cahn’s XI and a team raised by W.H. Sherwin of the Nottinghamshire CCC committee ‘produced thrills, surprises, some fine batting and a remarkably fine bowling performance by Reg Perks, the Worcestershire fast bowler’, who took seven wickets.

The British Empire XI ventured to the Midlands, taking on Nottinghamshire on 21 June 1940, with New Zealander spinner Bill Merritt bamboozling the Robin Hood county with figures of eight for 48. The following day many of the same players appeared at Sir Julien Cahn’s ground as the Essex duo of Harry Crabtree and Sonny Avery enjoyed an opening stand of 219 against an invitational XI.

In one of the eight matches Nottinghamshire played at Trent Bridge, the former scourge of Australian batsmen Harold Larwood emerged from his cricketing purdah to help raise funds for war charities. Bowling at rapid pace, he took three wickets in four overs and was then taken off to prolong the match. His erstwhile county and England opening partner Bill Voce, who was appearing regularly for Hucknall, provided left-arm venom from the other end. Voce had made his first wartime appearance on a cricket field on 19 July, against Notts Amateurs, taking two wickets and scoring 40 runs.

As one thrilling duo played out the twilight of their careers, young stars were on the rise. Cyril Poole, an 18-year-old from Mansfield Woodhouse, made 101 not out, alongside Reg Simpson (100 not out) against an RAF XI. Both men, valuable wartime finds, would go on to be county stalwarts in the post-war years and represent England. Simpson, whose night-time service with the Nottingham City Police left him free to play most weekends and many weekday evenings, scored 2,750 runs during the season. He shared another large partnership with Joe Hardstaff against Leicestershire at Trent Bridge, each recording centuries. As summer turned to autumn, some Nottinghamshire clubs were determined to wring the last drop of daylight from the season. Gedling Colliery in Nottingham played four matches during October, with their 60-year-old bowler H. Bettison claiming 177 wickets in the season.

Sir Home Gordon’s compilation of statistics from the ‘big’ matches saw Joe Hardstaff at the top with an average of 58.00 from his eleven innings. 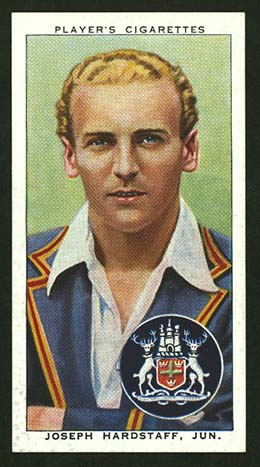 By 1942 Nottinghamshire’s Walter Keeton was one of several dozen prominent county and test player appearing in the Bradford League. In one match for Bingley against Keighley his century eclipsed that of Lancashire’s Eddie Paynter in front of 5,000 spectators. Across the Pennines county professional Jack Blood was appearing in the Ribblesdale League. Nottinghamshire CCC played their customary wartime matches against Derbyshire and Leicestershire at Trent Bridge, although all sides were depleted compared to their previous wartime iterations due to the demands of overseas military service. Reg Simpson was on the far side of the Atlantic training to be an aircraft pilot whilst Joe Hardstaff and Charlie Harris were stationed in India.

Harold Larwood had brought his eminent but contentious cricket career to a close by 1943. The Cricketer noted that the 38-year-old had ‘apparently given up cricket and now devotes all his time to poultry farming and market gardening at Annesley Woodhouse’. 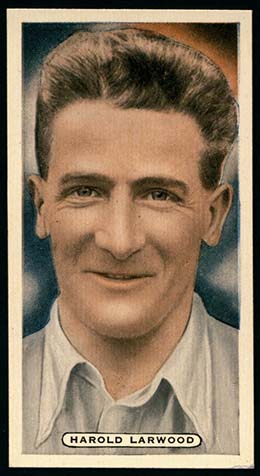 Reg Simpson returned to the UK in 1944 and was in good form, scoring 41 for Nottinghamshire v a Services XI at Trent Bridge on 24 June. His services were in great demand. Over a period of nine innings in nine days Simpson scored 529 runs at Trent Bridge, Lord’s and Edgbaston. 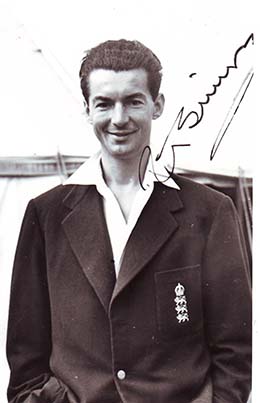 ‘Every member of the side is agreed that the Trent Bridge ground is the finest in England,’ proclaimed Lindsay Hassett at a reception given to the Australian Services XI by the Lord Mayor of Nottingham during the match with Nottinghamshire in 1945. Trent Bridge showed few scars from the bombing of 1941 when 223 incendiaries were dropped on the playing area. Fires had burnt out some of the buildings behind the pavilion, with the cost of repairs estimated at £5,000. The match also marked the first appearance for the county since 1939 of Bill Voce. The historic Trent Bridge pavilion was de-requisitioned by the military authorities. It had been used by ATS staff serving in the Army Postal Service. The commentator’s box had served as a medical room and, according to Dorothy Pelmear, one of the ATS postal workers based in the area, ‘worst sacrilege of all, we drilled on the hallowed turf! What would Denis Compton et al have thought of that?’

A match in Bombay was arranged to mark the two VJ holidays. A Services XII played Sundar CC. The nucleus of the Service team was made of Mixers CC members. This club had been formed in December 1944, with a core of first-class players including Denis Compton, Joe Hardstaff and Reg Simpson, under the patronage of Prince Duleepsinhji. In a low-scoring match, Dattu Phadkar’s fourteen wickets proved decisive in a Sundar victory.

The Nottinghamshire side which took to the field in 1946 had a familiar look about it. Of the nineteen players who represented the county that season, fourteen had made their debuts before the war. Walter Keeton, one of Wisden’s final pre-war five cricketers of the year, hit 160 to steer the county home against Kent. Bill Voce was back to spearhead the attack and enjoy a return to Australia with the 1946/7 MCC tour. The county rendered sterling wartime service in providing regular big matches at Trent Bridge for the enjoyment of war-weary workers and had been fortunate in unearthing the `find’ of Reg Simpson, who would be the bedrock of their batting for the succeeding decade.