Northamptonshire had been perennial strugglers in the county championship in the years leading up to the Second World War, with consecutive finishes of 17th, 17th, 17th, 17th and 16th. In fact for three consecutive seasons the county had failed to win a single match. However their cricket was played in the right spirit, and Northamptonshire would emerge to be one of the most active counties in wartime cricket.

Countless thousands of cricketers would lose their lives on active service during the six horrific years of war, and 1940 saw the start of the entries into that sorrowful scorebook. Robert Nelson, who as county captain in 1939 had lifted Northamptonshire off the foot of the championship table for the first time since 1933, returned as master to his old school in Harpenden. In July 1940, he answered an advertisement in The Times inviting applications for commissions in the Royal Marines.

He played in a match for Northamptonshire v Leicestershire at the Spinney Hill Ground in Northampton in August. Nelson had already pledged, in a letter to the Northamptonshire committee, to ‘thoroughly erase’ the ‘barbaric underside of European civilisation’ that Nazism represented.

Nelson appeared for the British Empire XI v the Buccaneers at Lord’s on 31 August, a match eventually abandoned due to repeated air-raid sirens. In his final innings he made 45 before being dismissed by Freddie Brown, who would become Northamptonshire skipper himself in 1949.

On 29 October 1940, Second Lieutenant Nelson was in the officers’ mess at the Royal Marine barracks in Deal when it received a direct hit from an enemy bomb. Nelson was amongst the thirteen fatalities. Sussex’s Hugh Bartlett, later to win the DFC serving with the Glider Regiment, wrote, ‘I was desperately sorry to hear of the death of poor Bob Nelson – what a grand fellow he was and what a loss he will be to all those lucky enough to have known him … a very even tempered fellow who kept things on a steady level.’ His parents chose to have Bob’s love for the game permanently recorded on his gravestone: ‘A Love of Cricket: He Maintained in his Life the Spirit of the Game’.

Northamptonshire’s County Ground pavilion was requisitioned by the National Fire Service and only a few local club games were possible on the pitch, so most of the county’s games took place at Spinney Hill, a mile away from the club ground. In May 1940, Northamptonshire played London Counties in front of a Sunday crowd of 3,500.

In a rare wartime two-innings match in June, London Counties XI drew with Northamptonshire. The biblical supplication of ‘Am I my brother’s keeper’ was applicable with Denis Compton scoring 0 and 92, being denied his century in the second innings, ‘stumped Compton, L.’, as Leslie appeared as a guest for Northamptonshire. 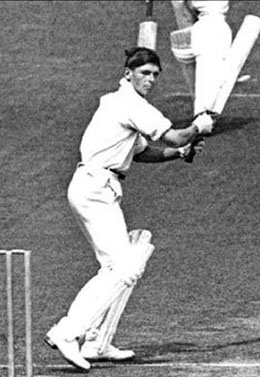 Yorkshire-born Eric ‘Budgie’ Dixon had made his home debut for Northamptonshire v Somerset in July 1939, scoring 128. Thriving on hard work, in the same term in which he captained Oxford University at cricket he took a Second Class in the Honour School of Modern History. Whilst serving as a sub lieutenant in the RNVR, his plane was lost near Libya on 20 April. A man who always put his team above himself, in his farewell letter he wrote, ‘please think of me with smiles not tears’.

On 26 July a wireless commentary on the London Counties v Northamptonshire match was given by Captain E.W. Swanton during the afternoon, with an account of the Ulster v Army XI match on the same day provided by A.D. May. 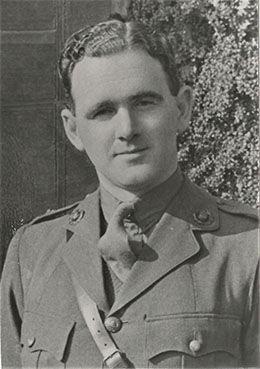 Northamptonshire played against London Counties and, on 27 July, the British Empire XI in a memorial match in honour of the late R.P. Nelson. As the county won an exciting encounter by 2 runs, Mr Robert Nelson snr was present with members of his family. Before the tea interval a short ceremony took place when tributes were paid to ‘Bob’ Nelson by Desmond Donnelly, the Empire captain, W.C. Cooke, Northamptonshire chairman and Jack Webster on behalf of the Cambridge University Cricket Club. There were written tributes from Pelham Warner and R.C. Robertson-Glasgow. Cooke stated, ‘Northamptonshire has had many gallant captains, but never a more gallant one than R.P.’

Meanwhile a handful of Northamptonshire professionals were turning out in the Yorkshire leagues. John Timms helped Windhill to a Bradford League title with an innings of 86 not out against Baildon Green.

In the Huddersfield and District League, Jack Buswell headed Kirkheaton’s bowling averages with forty-seven wickets at 13.99 each. Freddie Jakeman, the future Yorkshire and Northamptonshire batsman home on leave from the RAF, scored 54 in Holmfirth’s Sykes Cup semi-final win over Paddock. 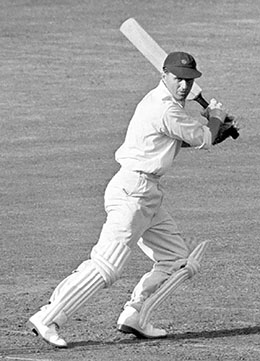 On a high July summer’s day, Northamptonshire, with 96 from the cultured Dennis Brookes, drew with the London Counties XI. Brookes, a loyal servant of the county, would go on to become Northamptonshire’s leading first-class run-scorer and first professional captain. Such was the demand for famous players to make up teams, the following weekend Brookes turned out for Gloucestershire against the RAF, making 69. The following day, the Kippax-born batsman continued his purple patch with 62 for a strong Tom Goddard’s XI. An attempt to provide an even contest by allowing a Local War Industries team to field sixteen players failed as the respective scores were 279 for four and 74 all out. At the end of the month, the Gloucester ground clearly being to Brookes’s liking, he took apart the county’s bowling for The Rest to the tune of 159 runs.

Northamptonshire appointed a new captain in Peter Murray-Willis, who had been discharged from the RAF on medical grounds and established a special subcommittee to further the county’s post-war interests. A decent programme of fifteen matches took place that season, including fixtures against the British Empire XI, Eastern Command, London Counties, The Buccaneers, Leicestershire and an Army XI, all at the Spinney Hill ground. Frequent candidates for elimination from the County Championship during pre-war discussions about streamlining the firstclass game in England, Northamptonshire remained a vibrant force in wartime cricket. Crowds of over 2,000 enjoyed their matches against the British Empire XI, Leicestershire and the West Indies.

Meanwhile on the fighting front Lieutenant Colonel Michael White, the former Cambridge University and future Northamptonshire all-rounder, had not allowed the fighting in North Africa to dull his appetite for the game. On 26 April, within the sound of the guns of the final assault on Tunis, he played his first match overseas. This was the first of a weekly series, on a satisfactory matting wicket on hard earth, but the outfield ‘had to be seen to be believed’. White put an appeal in The Cricketer for cricket balls, in whatever condition, to provide for his men.

On 16 July, Northamptonshire came close to being the first team to beat the RAAF that season. Peter Murray Willis inserted the Australians and they collapsed to 64 for six. Some good hitting from Bob Cristofani raised the total to 122. Strong all-round bowling and fielding, with Cristofani once more to the fore with four for 17, bundled out the hosts for a mere 53. Northamptonshire managed to fulfil thirteen fixtures – seven at home and six away. Three home matches were played at the Spinney Hill Ground, one on the ground of the True Form Shoe Company, two on the Corporation Ground in Kettering’s North Park and one at Wellingborough School. An away match against Sussex at Horsham was the first inter-county match south of the Thames during the war.

Despite the return of normal cricket after the war seeing Northamptonshire once more resuming their customary place at the foot of the championship table, the county had more than acquitted itself well on and off the field during the years of the Grim Test.