The 1930s had been a decade of toil for Leicestershire CCC. Only once had they risen into the top 10 in the County Championship (6th in 1935) and twice they had finished rock bottom. Like every other county their playing staff was denuded by wartime call-ups but Leicestershire still managed to fulfil a handful of annual fixtures. In 1940 the county played two matches against neighbouring Northamptonshire including one at the Spinney Hill Ground. They also visited Trent Bridge to take on Nottinghamshire. 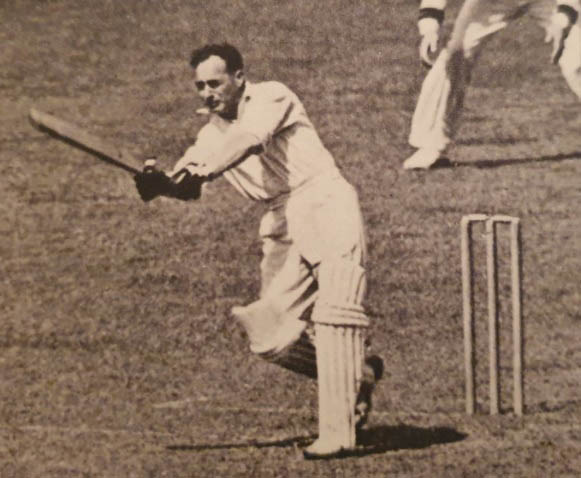 In 1941 the club actively supported the government’s Holidays at Home programme, organising fixtures to give local residents some brief moments of wartime cheer and leisure. On 2 June 1941, at the Kirby Road Ground in Barwell, Leicestershire skittled out their Northamptonshire visitors for just 57, fast bowler Haydn Smith claiming six for 21 before a fine display of batting by Stewie Dempster (104) and Les Berry (44) easily knocked off the runs and more.

Club cricket continued in the county. In a match between Carlton Hayes Hospital and Narborough, a batsman was ‘ploughed out’. The allocation of part of the cricket field for agricultural purposes led to this novel method of dismissal. A rule introduced by the hospital authorities stated, ‘All balls hit over the new fence erected at the end of the ploughed portion of the ground are a penalty against the batsman. He will score four runs thereby but be adjudged out.’

By 1941, the women’s game, which had developed to the level of Test matches between England and Australia, was restricted to charity, fundraising, or morale-boosting matches, with league competition suspended. However a match did take place as Nottinghamshire women beat Leicestershire women at Victoria Park, Leicester, the visitors scoring 65 to the hosts’ 32.

John Sharp, son of former county captain Aubrey Sharp, had played a handful of pre-war matches for Leicestershire. In 1943, serving with the Royal Horse Artillery, he earned a bar to his MC `in recognition of gallant and distinguished services in the Middle East’. Sharp would become Personal Liaison Officer to Field Marshal Montgomery in 1945 and eventually rise to become General Sir John Aubrey Taylor Sharp.

Once again Leicestershire arranged fixtures for the Holidays at Home programme. County affiliations proved fluid in the war. In one match between Leicestershire Services and Nottinghamshire and Derbyshire Services at Grace Road, Billy Sutcliffe, son of the great Herbert and later of Yorkshire, played for the home side whilst Essex all-rounder Stan Nicolls and Leicestershire stalwart Ewart Astill played for the visitors. Leicestershire also enjoyed the temporary services of Learie Constantine for that match, as it was all hands on deck in wartime cricket to provide a worthwhile spectacle with as many `names’ as possible.

By 1944 Leicestershire’s former Grace Road headquarters had been occupied by a state secondary school, but the local education committee decided that it was in the public interest that, after the war, the club should return to the ground they. The Aylestone Road Ground, which the club had played on for the previous four decades, had been left to drift into a state unfit for cricket. Fifty-five-year-old Aubrey Sharp, who had made his Leicestershire debut back in 1908, continued to captain the county during the season.

Tragedy befell the club when Major Charles Packe of the Royal Fusiliers, who had captained the county several times during the 1932 season, fell in action following the Normandy Landings near Caen. His wife Margaret gave birth to their daughter two weeks after his death.

George Dawkes, the promising Leicestershire wicketkeeper who had made his first-class debut as an 18-year-old in 1939, was singled out in The Cricketer for his pluck and keenness. Having dislocated a finger in a midweek match, he turned out for Windhill in the Bradford League on the Saturday, and the following day at Coventry, where he was unfortunate enough to fracture his jaw. He still played in a match two days later despite playing with a strapped-up finger and his mouth padded with cotton wool, effecting five stumpings and playing a forceful innings. 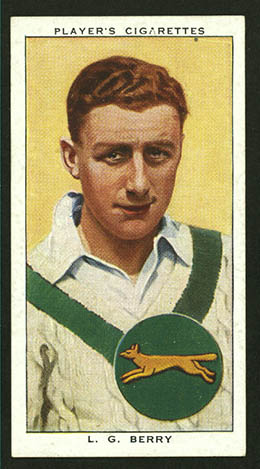 Leicestershire had arranged use of Grace Road for nine home county matches, in agreement with the headmaster of the secondary school which then occupied the site The resumption of the county championship after five barren years saw the return of the familiar feature of amateur-only captaincy – except in the case of Leicestershire. Long-serving professional Les Berry was given the position in the absence of any suitable amateur candidate. Berry was the first professional captain for one of the English cricket counties who was more than a stopgap, and was reappointed for two further seasons, lifting the unfashionable Midlands club to two 11th placed finishes.

Will the ECB finally do something now they have driven their greatest asset out of the game?