In the years leading up the war Kent had mostly hovered around the middle of the county championship table, with consecutive finishes of 10th, 8th, 12th, 9th and a slight upturn in 1939 when they finished 5th. Although playing activity would virtually cease during the war, paradoxically this allowed the club to rebuild its finances to emerge into a more secure post-war world.

In 1940 1,212 members continued to pay part or all of their subscription, allowing essential work to be carried out at the St Lawrence Ground and for allowances to be paid to members of staff called into the armed forces. Wages for existing staff continued to be paid. However, infrastructure repairs had been deferred until after the war.

Despite this resilience, some members expressed disappointment that the club had not arranged any county fixtures. The committee pointed out that ‘throughout the summer, Kent suffered from frequent air attacks, and it was not considered advisable to take the responsibility of causing crowds to collect when no adequate shelter was available. 35 Club and Army matches were played on the St Lawrence Ground, which is in good condition.’

Sadly the first of five English Test players to be killed in the war was an ex-captain of the south-east county. Geoffrey Legge, just six days after having been promoted to the rank of lieutenant commander in the Fleet Air Arm, was killed in a flying accident in Devon on and buried at St Merryn in Cornwall.

In order to address the paucity of playing activity amongst southern county clubs, the first of what would become an annual fixture took place when a combined Middlesex and Essex team took on Kent and Surrey at Lord’s during the August bank holiday – the first such double county encounter since 1878. With a crowd of over 16,000, someone suggested a photo of Lord’s should be taken and sent to Hitler to show, as Home Gordon related, ‘how thousands in the most bombed town in the world stayed put and revelled on their Bank Holiday’.

August 1941 marked the centenary of the Kent County Club’s first appearance at Canterbury, a defeat against ‘England’ by 74 runs at the Beverley Ground in the Cavalry Barracks. To mark the occasion, the St Lawrence Beverley Club arranged a match against an Army XI, which took place on the August bank holiday. Before play began, the captains, H.F. Reed and Brigadier Robertson, laid a wreath at the memorial to Colin Blythe, the Kent and England bowler who had fallen in the previous war. Despite the lack of star names, 4,000 people attended. The band of the Buffs played in the afternoon, providing what one spectator recalled as ‘quite a Cricket Week atmosphere’. The Mayor of Canterbury entertained 250 National Savings Group workers in the tea interval.

Kent CCC continued to accrue financial advantage from the war as 932 members’ subscriptions enabled a profit of £359 6s 5d. Allowances continued to be paid to members of the staff in the services. The St Lawrence Ground remained intact, though increasingly threadbare, with post-war painting and repairs reported necessary. The ground had played host to seventy-three matches, mainly involving military or civil defence units against the St Lawrence and Beverley Clubs, who had amalgamated for the remainder of the war to pool resources.

Another splendid encounter took place between the combined Middlesex and Essex team against Kent and Surrey at Lord’s during the Holidays at Home week. Sergeant Godfrey Evans led the resistance for the latter with 55 out of a total of 193 on first innings. Middlesex and Essex were set an improbable 190 in 100 minutes for the win. After thrilling batting by Compton and Edrich brough Middlesex and Essex to the brink of victory, Compton advanced down the pitch ready to smite the ball over the boundary for six but missed completely and was stumped by Evans. Thousands left Lord’s uplifted by such an enthralling and high-quality encounter and with the King George’s War Fund several hundred pounds to the good.

Kent’s membership was holding firm, with 886 members paying all or part of their subscription, resulting in a profit of £172 1s 0d. An impressive 132 matches were played on the St Lawrence Ground in addition to three athletic sports meetings. The annual report paid tribute to the groundsman, without quite being able to acknowledge the hired hand with a Christian name or title: ‘Great credit is due to Murrin for having prepared so many pitches.’ J.B. Murrin, who had been head groundsman for forty years, was to lose his home during an air raid and temporarily lived on the ground that he curated.

The ladies toilet was used as an explosives store. The Canterbury city authorities established a control room and air-raid shelter under the Concrete Stand, while the Iron Stand was used as a petrol store. The outfield hosted physical training by a local girls’ school, cross-country practice by the Army motorcyclists, and Home Guard training. Across the war, an estimated 268 incendiaries fell on the ground’s estate, 138 on the playing area, but damage was negligible. Kent CCC sought compensation for War Office ‘dilapidations’ and received £750. Despite these privations the Centenary of the Canterbury Week was celebrated with matches between Canterbury and District v Ashford and District Service XIs on the August bank holiday and fixtures involving Civil Defence and military sides. The start of the festival was marked once again by the laying of a wreath on behalf of Kent CCC at the Colin Blythe Memorial outside the ground 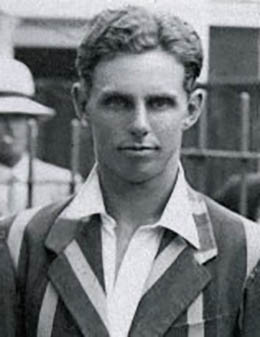 Kent CCC’s annual report bleakly stated: ‘Flight Lieutenant F.G.H. Chalk is missing.’ The popular and gregarious club captain, a former schoolmaster at Malvern College, had been awarded the DFC in 1941 while serving as a rear gunner in 218 Squadron in an attack on Hanover. On the return journey over Amsterdam the aircraft was attacked by a Messerschmitt 110 and P/O Chalk fired two steady bursts which entered the enemy aircraft, causing it to break away with flames coming from the starboard side. On 17 February 1943, having been promoted to flight lieutenant, he was shot down over Louches in northern France. Chalk remained on the missing list for almost a year before being presumed dead the following January, one of many cricketing schoolmasters to be taken so early from the world. 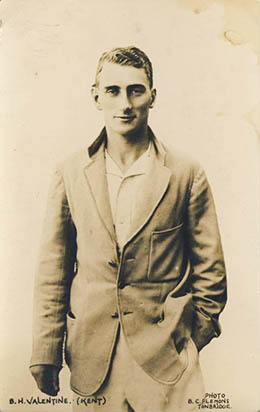 Bryan Valentine, the Kent and England batsman, was awarded the Military Cross while serving with the Royal West Kent Regiment ‘in recognition of gallant and distinguished services in North Africa’. Valentine would return to captain his county for the first three post-war seasons despite being badly wounded during the hostilities.

Kent CCC’s profit was £234 5s 8d from the subscriptions of 840 members. A remarkable 133 matches were played on the St Lawrence Ground in addition to three athletic sports meetings, and a baseball match for Red Cross funds. ‘These games are much appreciated by all ranks stationed in the neighbourhood,’ stated the club’s annual report.

The customary big match between Middlesex and Essex and Kent and Surrey on 28 August was ruined as a spectacle by an admixture of avoidable and unavoidable circumstances. Rain meant no play was possible until 2.35 pm, by which time Arthur Fagg had lost his cricket bag on a train and did not show up. Then a telephone call at 1.30 pm from Arsenal Football Club removed Leslie and Denis Compton for a match against Charlton Athletic. Bereft of the brothers, Middlesex and Essex slid to a heavy defeat. 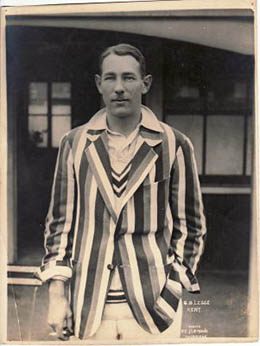 Kent were fortunate not to lose a triumvirate of captains, with both Geoffrey Legge and Gerry Chalk having already paid the ultimate price of war. In July Bryan Valentine was badly wounded in the leg shortly after the Battle for Caen and returned to the UK, where he was nursed by his wife, Elizabeth. Valentine later returned to Europe and after the conclusion of hostilities captained a British Liberation Army XI against the Netherlands in a two-day match at Haarlem in August 1945

The Middlesex and Essex v Kent and Surrey match finished in an exciting draw, with Doug Wright holding out with the bat for half an hour to ensure Kent and Surrey finished on 194 for nine. The Kent and Surrey captain on this occasion, off-spinning all-rounder Jack Davies, had augmented a First in the Classics degree he had taken at Cambridge in 1934 with a further degree in Psychology in 1939. His intermittent appearances in wartime cricket were limited due to his work with the War Office. Davies eventually rose to the rank of colonel, serving as Chief Psychologist in the Directorate for the Selection of Personnel, and receiving an OBE in 1946. Davies’s work was vital in the war effort, devising tests that ensured Army recruits were best placed in roles that would match their skills and psychological profile.

Kent CCC recorded a significant loss, contrary to the position during the wartime summers. The annual report stated: ‘It has been possible to maintain the ground in good condition, but the buildings need paint and repair. These will be effected as soon as possible after they have been de-requisitioned.’ Ninety-one matches were played on the St Lawrence Ground, with a crowd of 7,000 present to see Kent v The Rest on 8 August, with £216 11s 5d being collected for a local hospital. Kent won by 104 runs. Despite the grievous loss of Gerry Chalk, the report noted, ‘Luckily most of our 1939 players are still available.’

In 1950 Les Ames became the first professional player to be appointed a full member of the England selection panel. Although he served for many decades as a cricket administrator for Kent and England (and was kind enough to write to this 15-year-old author in the mid-1980s to answer a query about the 1932/33 Ashes tour), the war never left the amiable and phlegmatic stumper. In 1989, an archaeological dig in northern France revealed the remains of a crashed Spitfire and its unfortunate occupant, Flight Lieutenant Gerry Chalk. Ames, along with his former Kent teammates Godfrey Evans and ‘Hopper’ Levett, crossed the Channel to attend the funeral, conducted with full military honours, before Chalk was laid to rest at Terlincthun British Cemetery.

The county had survived intact, but, as in the previous war, lost many loved playing comrades.

Where are the emerging quality international batsmen?