With no particularly outstanding players in either the batting or bowling departments, Hampshire CCC had performed modestly in the years leading up to the war, with consecutive finishing positions of 16th, 10th, 14th, 14th and 15th. Indeed there were no single figure table positions between 1933 and 1947. However, what the Second World War demonstrated was that, although not of the first rank in terms of playing aptitude, the Hampshire men were of noble fighting stock, several of them performing heroic deeds even to the point of ultimate sacrifice.

With war meaning the suspension of all county competition, Hampshire’s 1940 AGM agreed that the club’s slow left arm bowling stalwart, Stuart Boyes would supervise junior coaching classes and the County Ground would be available for club matches. By December 1940, more than a thousand  members had renewed their subscriptions. Several clubs were able to play in the county during the season, despite the area being a target for heavy bombing, with competitions in Southampton, Bournemouth and Winchester. At the Southampton Sports Centre, an Australian XI scored 152 for seven to beat Southampton Touring Club (110). At the County Ground, Arthur Holt and Stan Broomfield shared a century opening partnership for H. Eggerton’s XI and Charlie Knott took eight for 40 to beat John Kemp’s XI. Luftwaffe bombing damaged the pavilion at the Southampton headquarters whilst Dean Park in Bournemouth was put to military propaganda use, with a captured German bomber being put on display. Despite all this activity the Hampshire county club was unable to field a side in 1940.  The southern coastal county had provided four recruits for the Army – Cecil Paris, Gerry Hill, Richard Court and George Heath – whilst George Taylor, Alec McKenzie, Donald Walker and Alister McLeod joined the RAF. Notably, Neil McCorkell was the only player to take to the seas with the Royal Navy from this most nautical of counties. 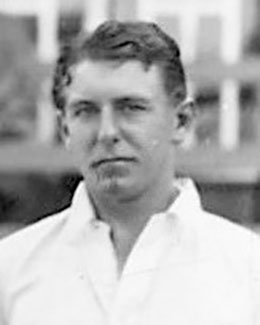 Pilot Officer Donald Fezard ‘Hooky’ Walker of 58 Squadron took off on the evening of 17 June 1941 with his four-man crew in a Whitley bound for a raid on Cologne. On the return journey the aircraft was intercepted by a Messerschmitt BF 110 and shot down near the Dutch village of Best. Walker had been a popular member of the Hampshire team of the late 1930s, establishing a county 5th wicket partnership record of 235 with Gerry Hill. Walker’s erstwhile county teammate, Army chaplain the Reverend John Steele recalled, ‘he communicated to all he met his vitality, optimism, faith and his simple belief that life was there to be lived.’ In addition to his cricketing prowess, Walker had captained the Dorset County Rugby Union team and the RAF rugby XV, and was a popular member of Bournemouth Sports Club.

Acting Flight Lieutenant Alec MacKenzie, a leg-break bowling all-rounder, became the first professional cricketer to be awarded the DSO having already won a DFC the previous year. In early 1943 he brought home a disabled Lancaster from a raid on Berlin. His aircraft was subjected to heavy and accurate anti-aircraft fire. Two of its engines were rendered unserviceable. Height was lost but, although faced with a 300-mile flight across the North Sea, MacKenzie continued his journey. Halfway across the water a third engine overheated. It was now down to 600 feet and the situation appeared hopeless. MacKenzie, displaying grim determination, flew on and eventually reached England, landing his damaged aircraft, saving his own life and those of his crew. The modest MacKenzie, who had previously played for Kent, was made the guest of honour at Canterbury’s 1943 Wings for Victory week.

Continuing Luftwaffe assaults on the home front took its toll of cricketing life. May 1943 saw the worst raid of the war on the picturesque Suffolk coastal town of Southwold. Seven fighter-bombers targeting Lowestoft spotted barrage balloons over the port, turned south and flew at 100 feet above Southwold. One bomb destroyed a building in the grounds of St Felix School. Four more hit the town killing six people. Amongst the fatalities was 69-year-old George Katinakis. A right-handed batsman, Katinakis had made his first-class debut for Hampshire in 1904, playing a handful of matches for the county.

Across the Atlantic Ocean a charity match took place at Belgrano during carnival festivities, with over $600 being raised for a Prisoner of War Fund. Many Argentine players benefitted from the coaching of the mercurial Hampshire all-rounder Len Creese, serving with the Army in the country. Creese was rarely far from the bizarre and tragic, having accidentally shot his county teammate Gerry Hill in the leg before the war. Hill described Creese as being ‘as mad as a hatter’, although that ebullience was drained when, having taken up a post-war position as groundsman at Hastings, he saw his precious grandson killed by a heavy roller. 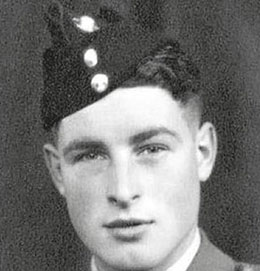 John Blake, a teacher of mathematics at Sherborne School, had played a few dozen matches for Cambridge University and Hampshire from 1937 to 1939. Having received a commission in the Royal Marines, he became part of 43 Royal Marine Commando. In February 1944, Blake and his comrades landed at Anzio, tasked with the job of capturing three peaks with bare, rocky, precipitous drops, to extend the bridgehead over the river Garigliano. Under mortar and shellfire, on the night of 3 February, D Troop fought through the night and seized Monte Ornito, with Captain Blake at the head of a bayonet charge which captured twenty prisoners. For this action he was awarded the Military Cross, the citation for which referred to his ‘outstanding gallantry and leadership … without hesitation and heedless of the danger’. Four months later, Blake’s commando unit had been transferred to the island of Vis on the Adriatic. During a diversionary attack on the island of Brač, designed to draw German fire from Tito’s partisans in Bosnia, Blake was killed a few weeks before his MC was confirmed. 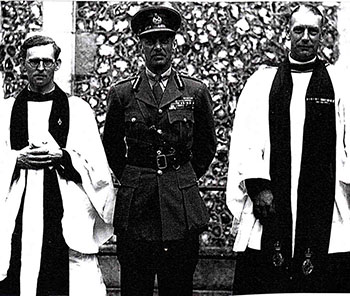 The Reverend John Steele had made seventeen first-class appearances for Hampshire during the 1938 and 1939 seasons, taking fifty-seven wickets with his medium pace bowling. By 1944, Steele had risen to the rank of Assistant Chaplain-General of the Second Army, one of the most senior ranks a chaplain could attain. On 4 June, he conducted a service at Christchurch, Portsdown, at which the commanders of the Second Army were present. Steele’s words placed the prospects for the success of the forthcoming Operation Overlord in the hands of God:

Lord, we desire to place ourselves and what we are about to undertake in Thy hands. Guide, direct and prosper us, we beseech Thee; and if Thou seest that this undertaking will be for Thy glory, grant us good success. Make us and those who act with us to feel that, unless Thy blessing is with us, we cannot succeed, and that, except the Lord build the house, their labour is but lost that build it. The war could only be won with God on our side, indeed if He were not, then any victory would be hollow. To Second Army there had been given a glorious part in a great task. To relieve the oppressed, to restore freedom in Europe, and to bring peace to the world. Equipped with all the power that modern science can give; and entrusted by our country with the man and the weapons for the accomplishment of this task, let us rise to a full sense of our responsibilities. As we stand upon the threshold of the greatest adventure in our history, let us now offer to Almighty God all our powers, of body, mind and spirit, so that our great endeavour may be thoroughly finished.

Four years later, the prayers having been answered, Steele returned with the Second Army’s commander-in-chief, General Sir Miles Dempsey, to unveil two memorial stained-glass windows as a permanent reminder of this historic occasion.

By 1945, with any threat of invasion having thoroughly repulsed, Hampshire arranged their first fixtures since 1939. As petrol was still rationed they were mainly against local teams – namely Southampton Police, Sussex (twice), Northamptonshire, Southampton, Aldershot Services and the RAF. The vagaries of wartime team selection were in evidence when a previously wired telegram arrived at Hove to inform the committee that Reverend John Steele was unavailable. Steele was already on the field leading his county against Sussex!

Despite the near conclusion of the war allowing for a more expansive set of fixtures for the 1945 season, many cricketers still remained at the heart of the conflict. John Manners, a hard-hitting, right-handed batsman and medium paced bowler, had played for Hampshire before the war. Having taken command of HMS Viceroy in December 1943, Manners’ ship was escorting a North Sea convoy on 11 April when one of the tankers was hit by a torpedo from a German U-boat. Manners ordered Viceroy to pursue the attacking craft, sinking it with three charges. Two weeks later, Manners returned to the scene of the sinking, recovering twelve bottles of brandy, which he sent to Winston Churchill, who responded conveying his thanks. Manners was mentioned in despatches and was awarded the Distinguished Service Cross. In May 1945, Manners received the official German surrender of Norway in Oslo, finishing the war as a lieutenant commander. He would have several decades to reflect on these experiences, becoming the oldest living first-class cricketer before his death in 2020, aged 103.

The cricketers of Hampshire had served their country nobly on land, sea and in the air. Spiritual sustenance, so important to the maintenance of wartime morale, had been supplied to the men of the Second Army. The county can reflect with pride its contribution to Allied victory in The Grim Test.

Four wicket-keepers and an all-rounder