Gloucestershire had proved to be a force in county cricket in the years leading up to the war, with two 4th placed finishes in 1936 and 1937, rising to 3rd in the table in 1939. The mainstay of their batting was England’s premier batsman Walter Hammond, still one of the first names on the teamsheet in any all-time England XI. Tom Goddard’s big off-spinners regularly bagged 150 wickets per season to lead the bowling attack.

Hammond provided a rare example of a player of the 1930s switching from professional to amateur status, being given a sinecure in a Gloucestershire firm so that he could captain the county, and thence the England team. This elevation in status did not prevent his industrial language response to the news of the Nazi-Soviet pact of 1939, ‘Oh Christ. Now the cat’s among the fucking pigeons.’

During the Lord’s Test that summer, Hammond appealed through a megaphone for people to volunteer for National Service in preparation for the looming war with Germany. Hoardings around the ground challenged the spectators: ‘National Service – are YOU playing?’ As a schoolboy, Hammond had been called to his headmaster’s study to receive the news that his father had been killed on the Western Front. This memory did not dull the enthusiasm with which he supported the nation’s call to arms to meet the foe once more. On the outbreak of war, Hammond immediately joined up, receiving a commission as a pilot officer in the RAFVR.

Hammond had was posted to the RAF No. 3 Initial Training Wing, serving in Hastings, then Torquay. In both locations he was able to play some cricket, including an appearance alongside Les Ames and Leonard Crawley for an RAF XI v Sussex. In late 1940 he was posted to RAF Middle East Headquarters at Cairo, remaining there for three years. Given his public profile, he was responsible for promoting sporting and entertainment facilities for officers and men across Africa, a fact that in later years would cause Hammond some regret, leaving a lingering feeling that his war, although a ‘good’ one, had not challenged him as much as many of his playing comrades.

On 10 May 1941 Gloucestershire entertained the wartime British Empire XI at Newnham on Severn, Tom Goddard ensured a nail-biting tie with his four for 56. Goddard was also the scourge of the Empire XI when he appeared for Evesham. A county match occurred at the Clifton College Ground near Bristol between teams representing Gloucestershire and Somerset in July, although many guest players from other counties appeared, including Frank Vigar of Essex and Tom Spencer of Kent, who would stand as umpire in the first ever World Cup Final at Lord’s in 1975.

Goddard was also employed as a professional in the Birmingham and District League, Not normally renowned for his runscoring, with a first-class batting average of under 10, Goddard made consecutive scores of 140 and 106 for Kidderminster in May. 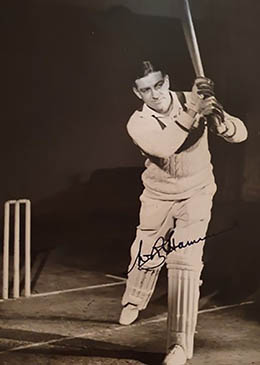 In August, Walter Hammond scored a century in a match in Egypt for the Gezira Club against a 1st South African Infantry Brigade side, which included Test players Dudley Nourse and Athol Rowan. In December, a Transvaal XI played the RAF at Johannesburg. Hammond gave spectators a taste of his powerful driving on the off-side, smashing the ball between mid off and cover and cover and point with terrific force during his 130. The Wanderers Club shouldered the entertainment expenses and the gate of £150 was divided between the RAF Benevolent Fund and South African War Charities

Elsewhere on the African continent cricket took place wherever and whenever the opportunity presented itself. The most popular draw available, Hammond took part in a charity match in Kenya between Kenya Kongonis CC and the Southern Rhodesia Armoured Car Regiment. The Kenyan club’s historian recalled: ‘The sun shone, the grass was green, never before had so many spectators congregated at a cricket match in Kenya and lastly but most importantly Hammond scored a typical and chanceless hundred … and by his modesty and charm made himself deservedly popular with all who met him.’

Gloucestershire’s sole fixture in 1942 was against an RAF XI. The cricketing year drew to a close with matches in South Africa and Australia. On 26 and 27 December, a first-class match took place at Johannesburg’s Wanderers Ground between A Combined Air Force XI and The Rest of South Africa. Walter Hammond captained the flyers’ XI, thus becoming one of the few English players to appear in a first-class match during wartime. The great man was ‘very much out of practice’ but later made some fine strokes including two powerful sixes. His sporting declaration on the second day allowed the Springboks to win the match in the final over, The Cricketer reporting, ‘a fine game with a fine climax and for a fine cause’, with £1,000 being raised for war charities. At noon on the second day, spectators and players observed two minutes’ silence in honour of the sportsmen of the allied nations who had fallen in the conflict.

Far away from the adulation Hammond was experiencing across Africa, his erstwhile county comrade Lionel Montague ‘Monty’ Cranfield, the Gloucestershire leg and off-break bowler, experienced a nervous breakdown during service with the Manchester AFS and was put onto farming duties. Cranfield had been playing for Castleton Moor in the Central Lancashire League in 1941. The Rochdale Observer noted that he had ‘badly damaged a hand at work’ and was not ‘thoroughly fit for several games’. 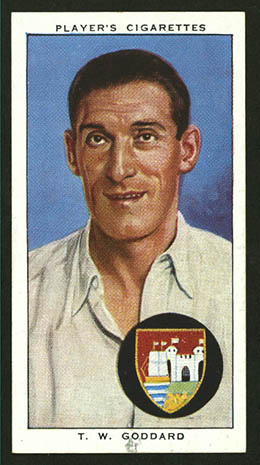 Tom Goddard had accepted the invitation to play in the Bradford League. On his debut for Saltaire against Brighouse, he took nine for 19, receiving 5 guineas in collection money for his efforts, Dennis Brookes, a stalwart of Northamptonshire cricket, turned out for Gloucestershire against the RAF, making 69. The following day, the Kippax-born batsman continued his purple patch with 62 for a strong Tom Goddard’s XI. An attempt to provide an even contest by allowing a Local War Industries team to field sixteen players failed as the respective scores were 279 for four and 74 all out. At the end of the month, the Gloucester ground clearly being to Brookes’s liking, he took apart the county’s bowling for The Rest to the tune of 159 runs.

Sergeant V.D. Guthrie of the RAAF also appeared for Gloucestershire v RAF, sporting a white England Association Football shirt, complete with the three lions. Hampshire’s Ted Drake, the famous Arsenal footballer, who also played in the ersatz Gloucestershire team, commented that he wondered what size ball would be used.

The West Country would see more high-class cricket in 1944 than previous wartime seasons, with G.O.J. Elliott developing an impressive fixture list for his West of England XI. Elliott had had unsuccessful trials for Gloucestershire as a young man and had become a regular in the Gloucester City XI. He went to France in 1940 with the Gloucester Regiment, was seriously wounded during the evacuation, and brought back by hospital ship with a broken neck. His doctors believed his cricketing days were over. As he lay in bed encased in plaster of Paris he wrestled with the problem of how to restore first-class cricket to a decent level. He realised that many prominent players were in the forces or undertaking war work in the West Country, so endeavoured to combine them into a West of England XI. Elliott was discharged from the Army and returned to his post at the City Treasurer’s Office in Gloucester. He enlisted the support of F.O. Wills of the famous Bristol tobacco company, Bev Lyon and R.J.O. ‘Jack’ Meyer. A collection of pre-war stars was collected to entertain the West Country cricketing public. Elliott provided a tremendous infusion of energy into the lifeblood of the game at a time when … it fell to a low ebb. HCharities benefitted to the tune of £3,080 in 1944

Walter Hammond appeared at Lord’s for the first time in the war during 1944. His first appearance was for The Rest v Australia. He was cheered all the way to the wicket and his 46 included a straight drive off Bob Cristofani into the pavilion

The England skipper’s successful summer allowed younger spectators to admire the master in action after a long absence from top-class English cricket. One observer emphasised the link wartime cricket could provide between past glories and the future followers of the game:

but for these games many a young cricketer would have no opportunity to
see a first-class player in action and would be doomed to grow up without
that priceless heritage. … Imagine arriving at the age of fifteen, having seen
nothing of the majesty of W.R. Hammond, not a glimpse of the cricket of
R.W.V. Robins

The Bradford League continued to provide a fertile hunting ground for Tom Goddard who captured twenty five wickets at 5.36 in his first five matches in 1945.

In Wales a fund was started to endow hospital beds in South Wales and Monmouthshire in memory of Major Maurice Turnbull, killed in action in Normandy in 1944. On 18 August, a memorial match took place in honour of Glamorgan’s lost captain and secretary at the Arms Park between Glamorgan and a West of England XI led by Wally Hammond. Hammond also led England in the Victory Tests against the Australian Services XI and, in a showcase match against the Dominions at Lord’s, scored 121 and 102, becoming the first player to score two centuries in a first-class match on seven occasions.

As England cricket slowly reconstituted itself back to pre-war norms, Walter Hammond made a century for Gloucestershire in the first innings against Lancashire at Gloucester’s Wagon Works Ground. However, in a portent of the changing of the guard, England’s captain was absent with a strained back in the second innings as the visitors won by 135 runs. Nevertheless, Gloucestershire maintained their position as perennial challengers to the elite counties, finishing 5th in 1946 and 2nd to the mighty Middlesex side of 1947. More importantly Walter Hammond in particular had carried the cricketing torch through the grim war years right across Britain and throughout the African continent. Despite his later misgivings he had done his duty well.