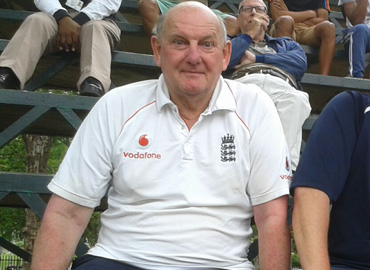 At least I managed to escape the rock I live on for the second time in two weeks and join the usual reprobates for the much awaited fourth test. Usual preparation on the eve of the event was, guess what, alcohol and curry. Sets you up for day 1.

As I was once again staying in Huddersfield it was my turn to rendezvous with them, rather than me having to wait for hours for them to escape from Lancashire, I had to cross the border instead. That was the easy part. It took longer to get from Piccadilly station to Old Trafford than it did to achieve that crossing. Thanks to the tram system we got there. Not in time to see the first wicket though. How did we know who it was?? The boos of course!! Meanwhile the wind was too strong for the fancy green bails so play continued without for a while until some clever dick inserted screws to weigh them down. Surely the ECB could afford the heavy ones.Two down by lunch which brought in the Manchester rain. No change by 3 so off we went to the Director's Box and there we stayed, watching Labuschagne (67) and the Fidget (60*) until the weather intervened once more with the score on 170 for 3. Then we had the farcical home quarter final of the baseball involving Lancashire which had to be played away at Durham. Free bus from Old Trafford didn't carry many if the number of empty seats was anything to go by. Essex couldn't have sent many either. Typical ECB scheduling. Later on the Saint and a few mates from Oxford arrived on their way out to more interesting venues and bright lights!!

Joined by the Doubter from Dobcross for the next 4 days, how will he cope when his only other appearances have been ODI's. Dawned to better weather apart from the rather chilly autumn wind. The cricket was unlikely to warm us with the prospect of watching the Fidget bat all day. The Saint's party were up on the wobbly temporary stand feeling the cold more than most in their summery gear. Our fears were realised. How do we get him out. By not dropping catches and overstepping, I would suggest for starters. So once again he takes advantage, a double ton this time. Hardly an innings to drool over but some classy shots nevertheless. With 8 wickets down we adjourn to the Sevenoaks with the Saint, Baby Dave and Marcus P lookalike, for the usual few bevies whilst anticipating a declaration. So 298 needed to avoid the follow on!! One down for 23 with Craig Overton expected to provide some night watchman heroics in the morning. Stokes may have an injury which hopefully is not serious. Much rain needed tomorrow. A rather tasty Chinese meal followed before getting back to Huddersfield in the early hours via a bus replacement. Oh well the weather should enable a lie in in the morning. 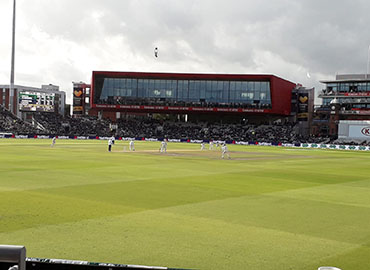 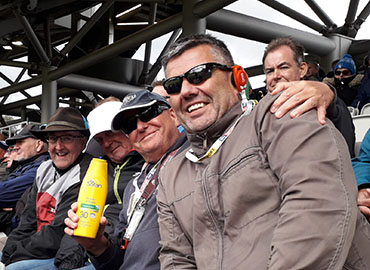 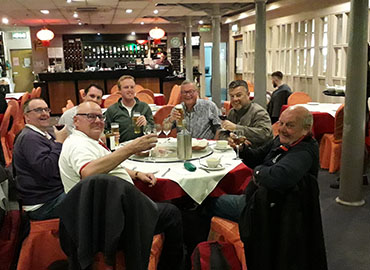 The rain dance has worked. No need to rush so we aim to be in our seats for a 13.30 start. A rather optimistic 78 overs to be bowled. No chance at current rates. We have a sweep on what the score will be at close of play, Midnight 272 for 6, Doubter 269 for 7, Higgy 210 for 5 and me 260 for 8. Overton departs in the second over. However Root (71) and Burns (81) dig in frustrating the convict's bowlers especially Cummins who has no luck. 'Gary' is no danger yet. Stokes and Bairstow see us through to the close under the lights until bad light stops play at 18.50. 200 for 5 from 64 overs so Higgy is the winner.

Much brighter today but still cold, what else can be expected at this time of year in Manchester. The subject of today's sweep is how many will England get, Midnight 275, Doubter 291, Lofty 315 and Higgy 349. Another impossible 98 overs today with the new cherry due in 6. Another 98 required to avoid the follow on which is unlikely to be enforced. Bairstow, Stokes, Archer and Broad are all dismissed before that target but Buttler and Leach see us over the line, just. 301 all out so Lofty wins the sweep. So the deficit is 196. They need to be knocked over quickly otherwise the Ashes are gone. Broad gets Warner LBW, again, for a 5 ball duck, then Harris - 16 for 2. Archer gets La buschagne and Head, 44 for 4. But how do we get the fidget out, he's taking the mick with some of these shots until he holes out on 82 from 92 balls. At least that stops him from creating another record, first to score a double ton and ton in the same Ashes test. Wade and Paine add to the misery until the latter gets fed up with time wasting and declares. So 383 to win. Cummins sends Burns and Root back to the pavilion for ducks from consecutive balls, 0 for 2. Lofty reckons that it's too dark but the umpires disagree. No more dramas until close of play at 16 for 2. Another unlikely 98 overs tomorrow to keep this contest alive. Not a hope with this lot or surely they won't prove us wrong.

So what time do we think that it will all be over. Doubter says 13.58, Lofty 14.26, Midnight 16.50 Higgy an optimistic Close of Play. At lunch the only casualty was Roy (31) but, just after, Stokes nicked one behind off Cummins and Denly (52) was caught at short leg off the largely ineffective 'Gary', 93 for 5. Surely an early bath is nigh. But no, Buttler started the resistance firstly with Bairstow (25) then Overton but then he left a Hazlewood inswinger that took out his off stump (111 balls for 34). Archer doesn't last long so Leach joins his Somerset colleague. 29.1 overs to survive with a new one due in 4.1. They lasted more than some of them, 14 overs until part timer Labuschagne gets Leach caught by Wade. In comes Broad so not much hope of survival with the best part of 15 overs left. So the last hour is signalled. There's no chance of the 15 overs being bowled before bad light intervenes. What a surprise it doesn't get that far. Overton is pinned LBW by Hazlewood for 21 off 105 balls. All out for 197 and a loss by 185 runs. Higgy has the sweep in his pocket. Midnight gets us access to the members bar for a well earned pint soaked up by a curry in his neighbouring village of Mossley. Still a chance of winning at the Oval to prevent losing a home series for the first time since 2014. Do I really think so, of course not, but you never know. How many new faces will we see over the winter?

So that's it. No more cricket until Centurion at Christmas when I look forward to seeing some of you. If not there, may be somewhere else in SA. I'm not going to NZ but those who are, will surely enjoy Mount Manganui. All the best to everyone.