Middlesex CCC had had a successful if frustrating run up to the war. In five seasons they had finished 3rd once and 2nd on no fewer than four occasions in the county championship, just missing out to Yorkshire four times and Derbyshire once.

However, due to the wet summer of 1939, gate receipts had dropped and the club’s secretary, erstwhile England captain Walter Robins, constantly fretted about the terms of the lease for his county’s playing facilities at Lord’s. Like most counties, the war years would bring Middlesex a steady stream of income from members paying their subscriptions, without the normal outlay of professionals’ wages.

The club, along with Sussex and Essex, mooted the idea in 1940 of a south-east series of two-day matches at weekends, including Sunday play, realising that players would not be able to be released from civil and military duties for three days. However, this suggestion came to nothing as the country was gripped by invasion fear over the summer, and much of the south of England was placed under restrictions. This left Middlesex players free to play for teams such as the British Empire XI and London Counties XI in high-profile fundraising encounters at Lord’s and elsewhere. In July 1940 the county’s brightest star, Denis Compton, compiled 51 as Eleven of Middlesex drew with Eleven of Lord’s.

Most of the county club’s first team regulars had entered the armed services. Gubby Allen, Ian Peebles, Jack Robertson, Denis Compton and George Mann had joined the Army, whilst Walter Robins and Bill Edrich served in the RAF. Grenville Stevens joined the RNVR.

As the Battle of Britain reached its height during August, the Luftwaffe turned its attention to attacking RAF stations in the south of England, causing some dislocation of planned matches. By 7 September Hitler, angered by British bombing raids on Berlin turned his attention to London. On that day, the match between a Middlesex XI and a Lord’s XI was delayed for some time by a long air raid, but the Luftwaffe planes were intercepted over the Thames, with only one getting through to drop bombs on the capital. The match was eventually completed in the gathering autumnal gloom. 51-year-old Patsy Hendren, who had made his first-class debut as far back as 1907, scored 45.

Sir Pelham Warner, the great administrator of both MCC and Middlesex CCC reckoned `our great national game should now plan to purchase a fighter plane. The cost of a Spitfire, £5,000, should be raised via clubs. Each person who had had the `very good fortune’ to play or watch cricket should pay one shilling amounting to between £1 and £3 per club. Warner took up his own suggestion by setting up a Middlesex CCC Fighter Fund, arguing that a county XI would only be able to grace Lord’s once the Royal Air Force had been successful `how better could the arms of the County Club – three scimitars – be carried than by a Fighter of our incomparable Air Force?’ Warner followed up the appeal in The Cricketer, quoting Churchill’s `Never in the field’ broadcast of 20 August `

The thin gruel of county fixtures during the previous English summer prompted the organisation of a combined counties match in 1941 as Middlesex and Essex took on Kent and Surrey at Lord’s during the August Bank Holiday, the first such double county encounter since 1878. The former side struck 412 for 6, with Middlesex’s Bill Edrich making 102 and Essex’s Sonny Avery 96. The Surrey and Kent side had reached 65 for 3 before rain ruined the contest. However, with a crowd of over 16,000, someone suggested a photo of Lord’s should be taken and sent to Hitler to show, as Home Gordon related, `how thousands in the most bombed town in the world stayed put and revelled on their Bank Holiday.’ Meanwhile MCC generously halved Middlesex’s rental for using Lord’s to £350. This was still a big ask as the county played no matches. 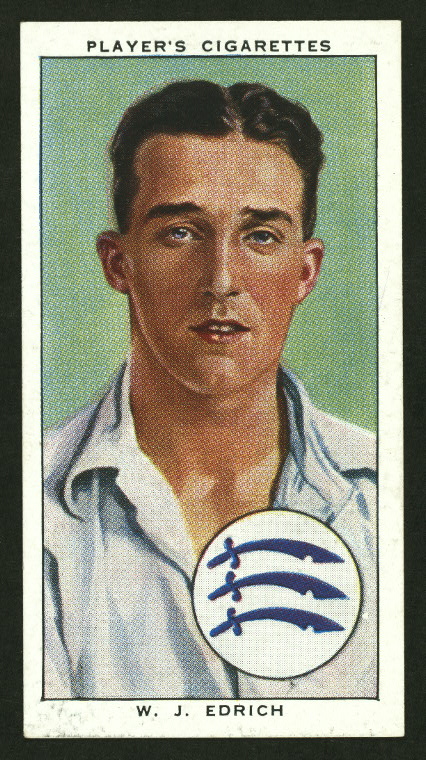 As the 1941 English season drew to a close a crowd of 10,000 saw the Army score 235-9 on 6 September in the last of 70 matches played at Lord’s, with Denis Compton contributing a century. This match was notable for the brief but glorious appearance of Compton’s Middlesex compatriot Bill Edrich, who had recently been awarded the DFC. Squadron Leader Edrich was cheered all the way to the wicket, scored 4, then was caught by Compton on the boundary. He was cheered once more on his journey back to the pavilion. The match ended as a draw in fading light, reflecting the passing of one more English summer

February 1942 saw the Fall of Singapore. One of the unfortunates taken prisoner by the Japanese was Len Muncer, then a useful lower-order batsman and occasional leg-break bowler for Middlesex. Muncer, a sergeant serving with the 1/5th Sherwood Foresters, was sent ‘up country’ on 1 November to work on the notorious Thai-Burma ‘Death Railway’.

His more fortunate county colleagues. Compton and Edrich, in a foretaste of their sunshine batting of 1947, added 68 in 35 minutes during the Middlesex and Essex v Surrey and Kent match. This left four needed off the last ball to pull off an improbable victory. Compton advanced down the pitch ready to smite the ball over the boundary for six but missed completely and was stumped by Godfrey Evans. Thousands left Lord’s uplifted by such an enthralling and high-quality encounter and with the King George’s War Fund several hundred pounds to the good.

One concern repeatedly expressed was the post-war provision of amateur county cricketers. It was recognised in Notes and Comments section of The Cricketer that most of the cricketers emerging from the public school milieu `will be so busy keeping the wolf from the door’ that little time would be left for county cricket. This would be of particular concern to counties such as Middlesex, who had employed only 44 professionals between 1878-1937 compared to Yorkshire’s 128. Despite the strong Northamptonshire showing in the wartime game, at the 1943 Middlesex CCC AGM, Pelham Warner spoke of there being `too many counties’ holding back the game. He also dug in his heels once more against the prospect of any change from the traditional county championship format.

Do not be led away by the call for bright cricket. It is a leisurely, intricate game of skill. We live in an age of speed and people are apt to think that cricket must be speeded up, but my experience is that it is not necessary to have fast scoring to have interesting cricket. I do not wish to see anything better than two fine batsmen opposed to two first-class bowlers, backed up by good fielding, then the number of runs scored in an hour is unimportant.

Denis Compton had been posted to India, where he delighted cricket-keen Indian crowds. On 10 September 1943, assisting the Bombay Gymkhana in a whole-day fixture against G.I.P. Railway, the Middlesex man gave one of the most spectacular displays of hurricane hitting seen in the city for a long time. During his stay at the wicket for exactly two hours, Compton hit nine 6s and eighteen 4s in his 174 not out with terrific drives, one hit smashing the scorers’ table and damaging the score book into the bargain. A versatile sportsman, Compton had played in a services soccer international, England v Scotland, two days earlier, scoring 2 goals in a 5-4 victory. 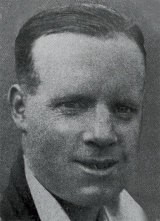 Sadness was felt in Middlesex hearts in the summer of 1944. Private Jack Lee, the former Middlesex and Somerset all-rounder and a regular for the London Counties XI, was killed on 20 June in Normandy while serving with the 208 Company of the Pioneer Corps. When the London Counties XI was wound up in 1946, the club’s remaining funds were given to his widow, Agnes. She was in sore need of the solidarity of her husband’s professional colleagues as shortly after his death the tobacconist and newsagent’s business she ran was completely destroyed by a flying bomb.

The Middlesex and Essex v Kent and Surrey match finished in an exciting draw, with Doug Wright holding out with the bat for half an hour to ensure Kent and Surrey finished on 194 for 9. Earlier rising Middlesex star, 17-year-old Luke White had top scored in the Middlesex and Essex innings with 77. White would go on to play in one of the 1945 `Victory Tests’ against the Australian Services XI, but make little further impact on the game.

Like most counties, Middlesex could look back on its wartime contribution with some pride. Ironically, normal service was resumed in 1946 as the county once again finished runners-up to Yorkshire in the championship before finally, in that golden summer during which sweet runs flowed from the bats of Compton and Edrich, they finished champions at long last. But all those who had contributed to the war effort and eventual victory were true champions of life. 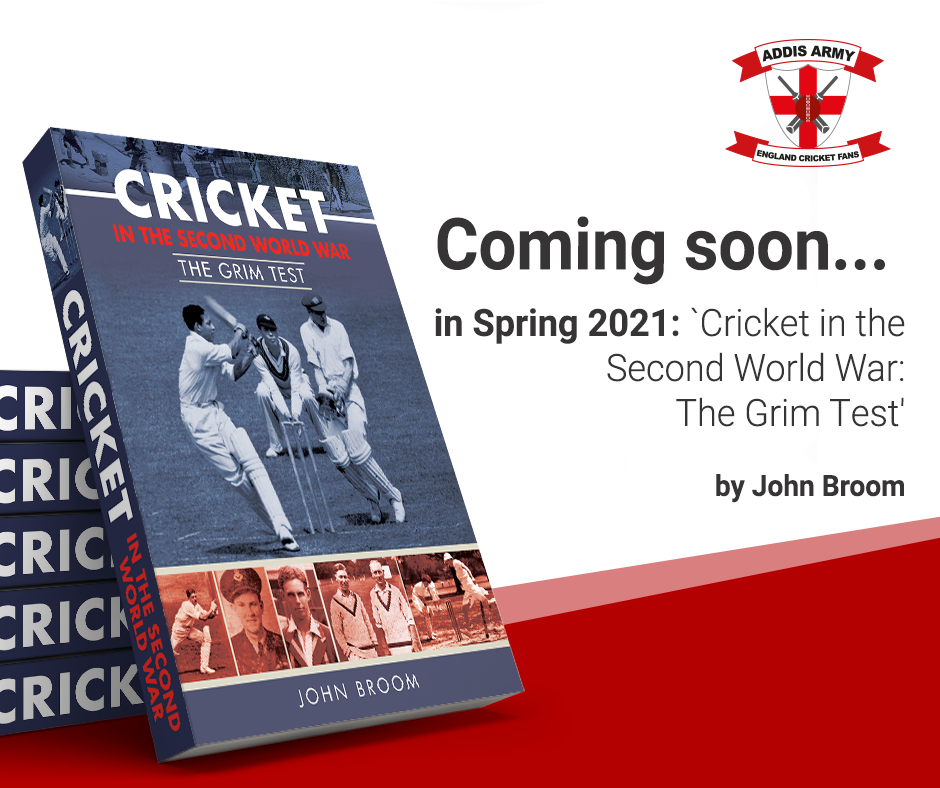